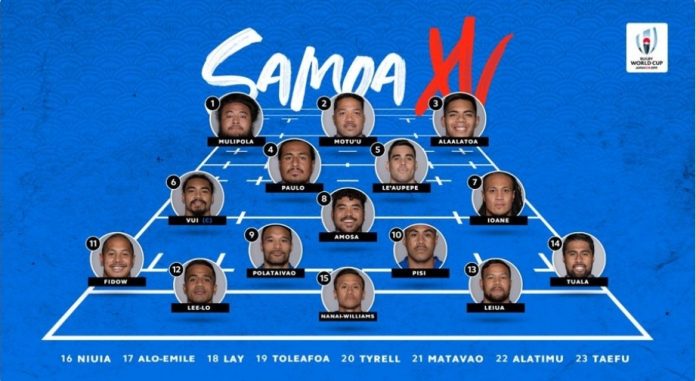 22 September 2019 RWC Japan. Manu Samoa’s youngest ever captain Chris Vui is back from injury to lead the men in Blue for their first match of the Rugby World Cup 2019 against Russia.

The 26 year old now playing for the Bristol Bears in the Gallagher Premiership.comes in at blindside flanker while twin towers Kane Leaupepe and Teofilo Paulo continue to build their combination as starting locks.

Coach Steve Jackson says veterans Mulipola and Matu’u have both earned their recall to the starting line up after strong second half performances against Australia two weeks ago.

Dwayne Poloataivao has been rewarded for his two try heroics against Australia with the Number 9 jersey while former Otago halfback Melani Matavao has been named on the bench.

Rey Lee-Lo and Alapati Leilua will continue their established combination in the midfield each with 25 and 28 Tests respectively. The duo will fire up all cylinders this coming Tuesday if they secure tidy set piece ball.

Tusi Pisi holds the keys to the kingdom in his hands as he and halfback Dwayne Polataivao will be the field generals for the men in blue.

Pisi will play in his 3rd World Cup and if he continues a solid performance off the Auatralian Test match will prove his critics wrong.

The starting side boasts nearly 300 caps of Test experience between them with
more than 50 caps amongst the reserves.

” Some players really put their hands up and that was what it was all about really. We want to keep consistency within the group and especially the
starting fifteen. And I think we’ve done that barring a few in the front row who deserve their opportunity after the Australian Test.”

Russia comes off a loss against Japan with only four days rest but Manu Samoa are aware of the oppostlition’s strengths.

“Russia is very good in the set piece,” said Jackson.

“They’re a big pack and they run direct and their midfield is strong. They’ve got a good kicking game too – so you know aerially we’re going to have to be on our game.”

The Manu Samoa coach says they have taken a self-focus this week in their preparation.

“This is our first game and it’s about our players being excited and going out there and enjoying themselves and having some fun. We’ve trained long enough now and Russia’s already got a game under their belt. So we’re just excited and can’t wait to get on the field,” Vaeluagaomatagi said.