Seilala Mapusua has named 9 new caps in his side to take on Tonga this weekend. The match will be Samoa’s first test match since the Rugby World Cup in 2019.

Mapusua has made two changes to his starting 15 that took on the Maori All Blacks just last week.

Olajuwon Noa will start at blindside flanker in his first cap in the blue colours, shifting Samuel Slade back to lock while Theo Mcfarland will fall from the starting line up to the bench.

Noa was strong for Samoa two weeks ago in his first match in the blue jersey and will complete a strong loose trio with Alamanda Motuga and Henry Time-Stowers. Motuga and Stowers were work horses last weekend, constantly making tackles and winning turnover ball for Samoa. The addition of Noa’s 1.93m frame should cause nightmares for Tonga.

In other changes, Tomasi Alosio will move to the wing allowing 23 test veteran Ah See Tuala to start at fullback. Elisapeta Alofipo will be the player to miss out as he has not been named in the Mapusua’s 23 man match-day squad.

Tuala was named to start last weekend but was pulled out of the match on game day due to injury. Alosio was called in to the starting 15 to replace Tuala and with a try in the second half against the Maori All Blacks, has secured himself a starting spot on the wing for his first cap.

Tietie Tuimauga, who was also a late change on game day last week has retained his starting spot at loosehead prop. The Manawatu prop was initially supposed to come off the bench, however an injury in the captain’s run to Albert Anae promoted Tuimauga to the starting lineup last week. He took this opportunity with both hands as he and Captain Michael Alaalatoa shut down a well-oiled Maori All Black scrum. Mapasua has seen enough from Tuimauga to award him with his first cap this weekend.

On the bench we see Seilala Lam and Ed Fidow finally getting their chance to pull on the blue jersey after completing their managed isolation time. Lam and Fidow last represented Samoa at the 2019 Rugby World Cup.

Seilala Lam will be joined on the bench by his brother Jack Lam, who is the most capped player in this side with 39 tests. 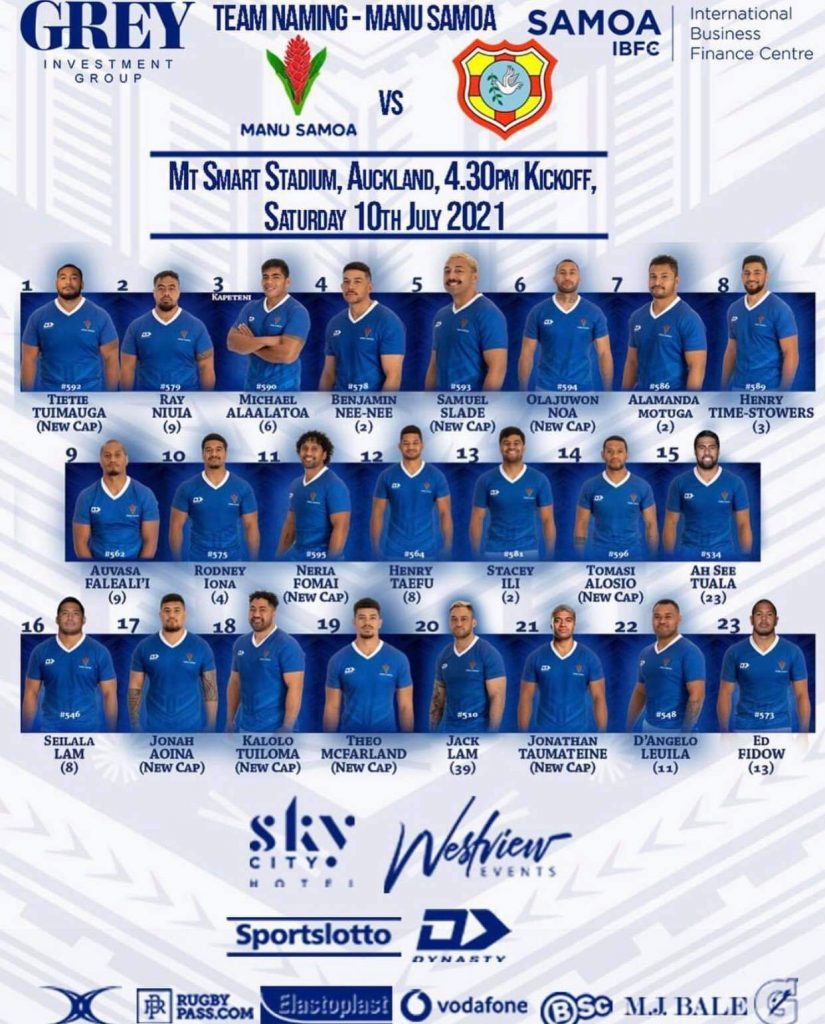 Team Manager for Manu Samoa Su’a Hesed Ieremia says there are no injury concerns and the team are in good spirits.