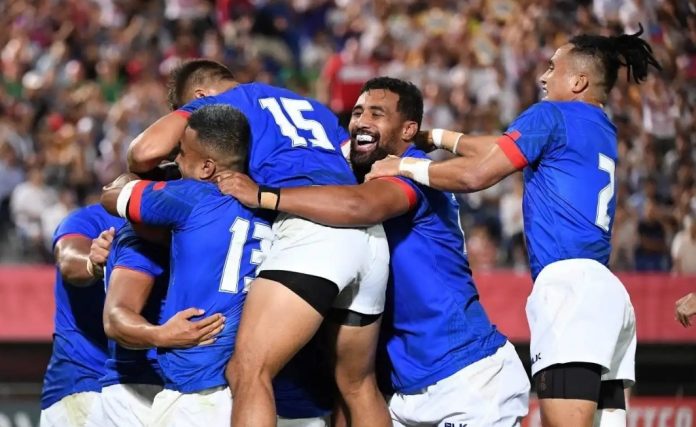 Leading 6-5 at half time, Russian Captain Vasily Artemyev said after the match that their goal was to earn respect and show that they could play good physical rugby.

Samoa took some time to get into the match with a first half riddled with missed tackles, handling errors and poor kicking by veteran fly half Tusi Pisi.  The boys in blue took 15 minutes to put points on the scoreboard.

Ill discipline by Manu Samoa contributed to the slow start with two yellow cards to Motu Matu’u and Rey Lee-Lo for dangerous tackles. Russia secured two penalty goals but could not capitalise on Manu Samoa being down to 13 players in the last 10 minutes of the first half.

Manu Samoa went to the break trailing 6-5 behind Russia but Steve Jackson didnt hesitate to make the necessary tactical changes which saw his side come back to score three tries in the first 12 minutes of the second half.

Samoa’s defense could not be penetrated by Russia as reflected by the 150 tackles made in the 80 minutes. Manu Samoa left the Russians tryless and now lead their pool with the highest points differential.

Mid-fielders Henry Taefu and Rey Lee Lo looked to be getting to know each other as the match progressed, both making breaks in attack while defending their space with solid tackles throughout the game.

Man of the Match Alapati Leiua scored a double for Samoa, both off beautifully executed skip balls. The first in the 15th minute by Tim Nanai-Williams and the second by Aana Chiefs Melani Matavao in the dying seconds of the match.

Ed Fidow continued his prolific form for Manu Samoa by scoring a double of his own. Fidow’s tries came off the back of good phase play by the Manu who executed structure to perfection.

Ed Fidow now joins an elite group of players who scored 10 tries in 9 test matches. He joins Tana Umaga, Bryan Habana and Shane Williams as the only four players who have ever achieved this at test level rugby.

Despite scoring a try in the 45th minute, Afaesetiti Amosa sustained a nasty knee injury on the way to the try line. A Russian arm hit him in the neck as he fell awkwardly onto the try line. It was a yellow card for Russia and a try for Manu Samoa, all in one go.

Details have not been released on Amosa’s injury however it looks like his Rugby World Cup campaign could possibly be over.

Kane Leaupepe got through a mountain of work over the 80 minutes and could well have been the man of the match.  Leaupepe was all over the paddock for Samoa with match statistics showing he’d made 20 tackles and 8 runs where he had beaten at least 3 defenders.

Samoan fans would have been worried when Motu Matu’u came off due to concussion. However Ray Niuia put those worries to rest after an outstanding 50 minutes of rugby. The Highlanders hooker brought a lot of energy off the bench making 17 of his 18 tackle attempts. Niuia also earned himself a try assist with a scintilating no look inside ball to Ed Fidow.

Niuia and substitutes Jordan Lay and Paul Alo-Emile dominated the Russian scrums in the second half giving Samoa’s backs the platform to fire on all cylinders.

The team’s only Samoan based player Melani Matavao came on for injured halfback Dwayne Polataivao at halftime. Matavao’s quick pace lifted the speed of Samoa’s game in the second half and Russia just couldn’t keep up. Matavao played a hand in Leiua’s last try with a pin point skip pass that put Leiua into acres of space.

Manu Samoa now have six days before their second match of the Rugby World Cup. Samoa play Scotland on Tuesday the 1st of October at 12:15am (Samoan Time).

The injury list would need to be assessed carefully as both Motu Matuu and Dwayne Polataivao failed sideline HIA – Head Injury Assessments and Afaesetiti Amosa looking to have sustained a serious knee injury.