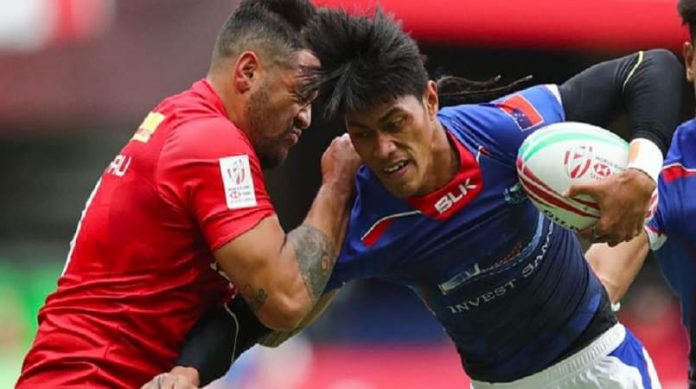 Manu Samoa player Johnny Vaili is denying charges of domestic violence for assaulting a woman in an incident that happened earlier this month, on the 10th of October 2021.

It is alleged that after a night of drinking alcohol with his intimate partner, 26 year old Johnny Vaili assaulted the woman who then filed a complaint with Police.

Represented by defense counsel Pose Toma, the former Manu Samoa 7s star and current 15s player entered not guilty pleas to the charges, and instead, presented the Court with a letter from the victim stating that she is partly to blame.

Vaili’s defense is based on a letter where the victim not only asks the Court to withdraw the charges, but releases the rugby star from responsibility by stating that they were both drunk and therefore both accountable for the incident that led to her assault.

Samoa’s Family Safety Act has a ‘no drop policy’ for complaints of domestic violence where victims are unable to later withdraw charges. This policy is in place across the world due to the fact that after an explosive incident that leads a woman to seek help with Police, they would often return to withdraw the charges once they have reconciled with their intimate partners.

Judge Talasa Atoa-Saaga has adjourned the matter to the 8th of November 2021.

Two Appearances in One Week

The very next day on Tuesday, Johnny Vaili stood before Judge Alalatoa Rosella Papalii for two charges relating to the assault of a male he had also been drinking with.

This time, he pleaded guilty to actual bodily harm, and being armed with a dangerous weapon, namely an axe.

The Court heard that Vaili was also under the influence of alcohol by his own admission to the Judge.

Judge Alalatoa then referred the rugby player for a probationary assessment to join the Court’s alcohol rehabilitation programme.

For that incident, Vaili will reappear for sentencing next week, on the 2nd of November 2021.

He was warned by Judge Alalatoa to refrain from consuming alcohol and to adhere to his bail conditions where he to sign in with Police once a week.

In July 2020, the Samoa Observer reported the rugby 7s star had been banned from Moataa village for an incident at Taumeasina Island Resort where he and others damaged property and threw furniture into the swimming pool. At the time, the Samoa Rugby Union also handed down a 6 month ban.

Vaili came off the ban in time for the Marist International 7s in February 2021 where he featured for the Faleolo Jetz. In May this year, Vaili was selected into Vaovasamanaia Seilala Mapusua’s 15’s squad for the World Cup Qualifiers.