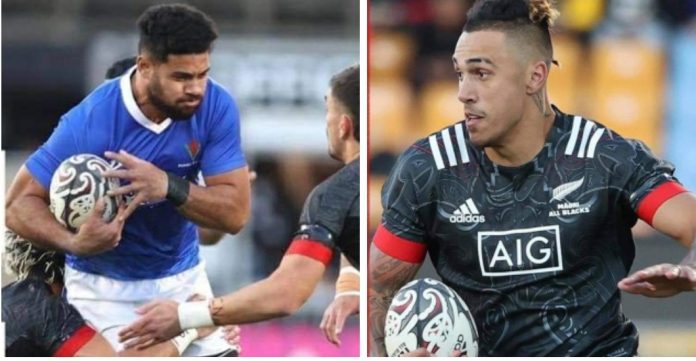 3 June 2021 Auckland NZ Samoa improved immensely in just 7 days against the Maori All Blacks but still came away with a 38-21 loss in a match where two penalty tries were awarded against them. 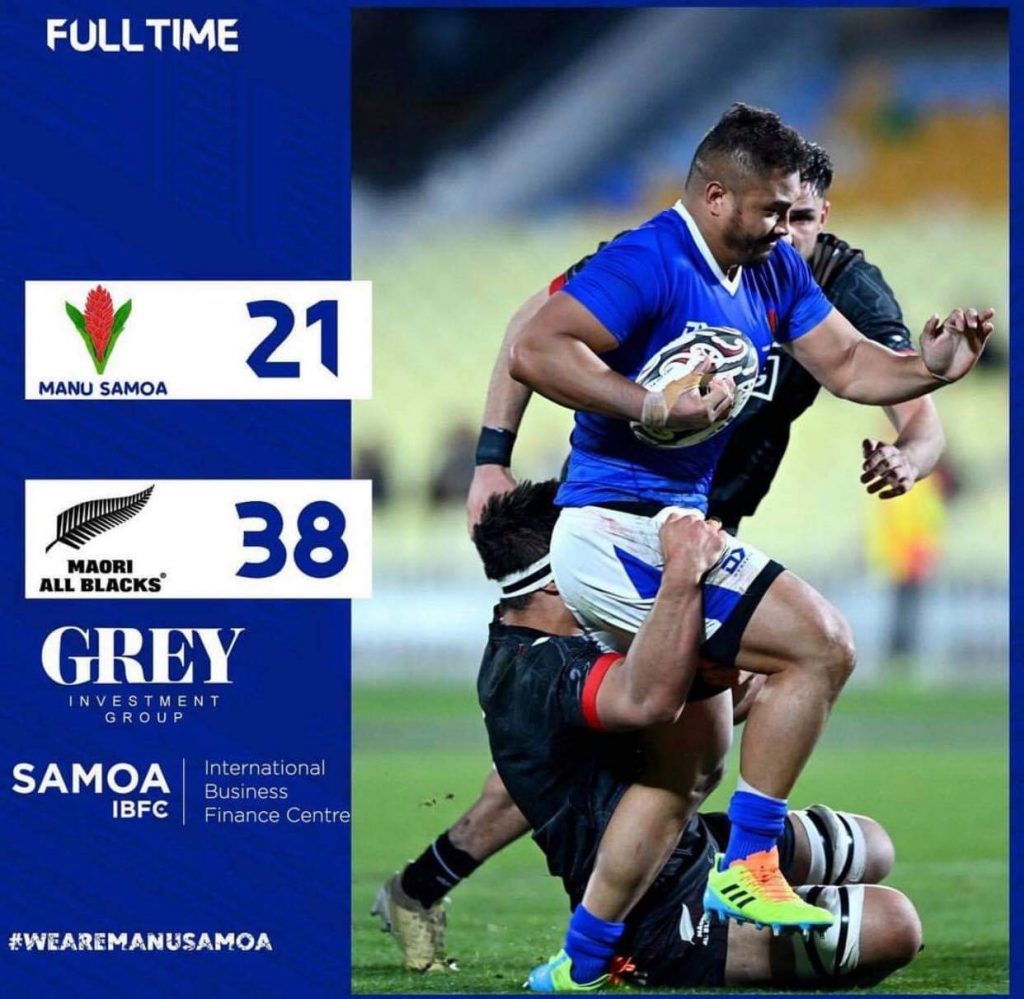 The Manu had structure and looked dangerous with ball in hand; their Achilles heel tonight being handling errors and problems around the lineout.

The first 20 minutes was scrappy. Neither team finding an edge over the other and both sides finding it hard to hold on to the ball.

Eventually the Maori All Blacks earn a penalty from the breakdown and elect to kick for touch. Off the lineout they go to their reliable rolling maul. Samoa don’t contest in anticipation and gave it their all, but captain Ash Dixon still found his way to the white chalk.

Leading by only 7-0 the Maori All Blacks felt confident and went wide straight from the kick off. Samoa shut that play down very quickly and forced the Maoris to kick. Rodney Iona caught that kick on the full and with a bit of footwork found himself in acres of space. Iona threw a dart of a ball to Neria Fomai who hit fifth gear and ran away for Samoa’s first try.

As you would expect from a quality outfit like the Maori All Blacks who consist of a plethora of Super Rugby players, the hosts responded in outstanding fashion.

Off set piece the Maori All Blacks cracked the Samoan right edge defence. Spreading the ball back to Samoa’s left edge who were in shambles. Billy Proctor made a half break and with a brilliant off load put Jonah Lowe in the corner to take a 12-7 lead.

In a blink of an eye the Maoris were leading 19-7. 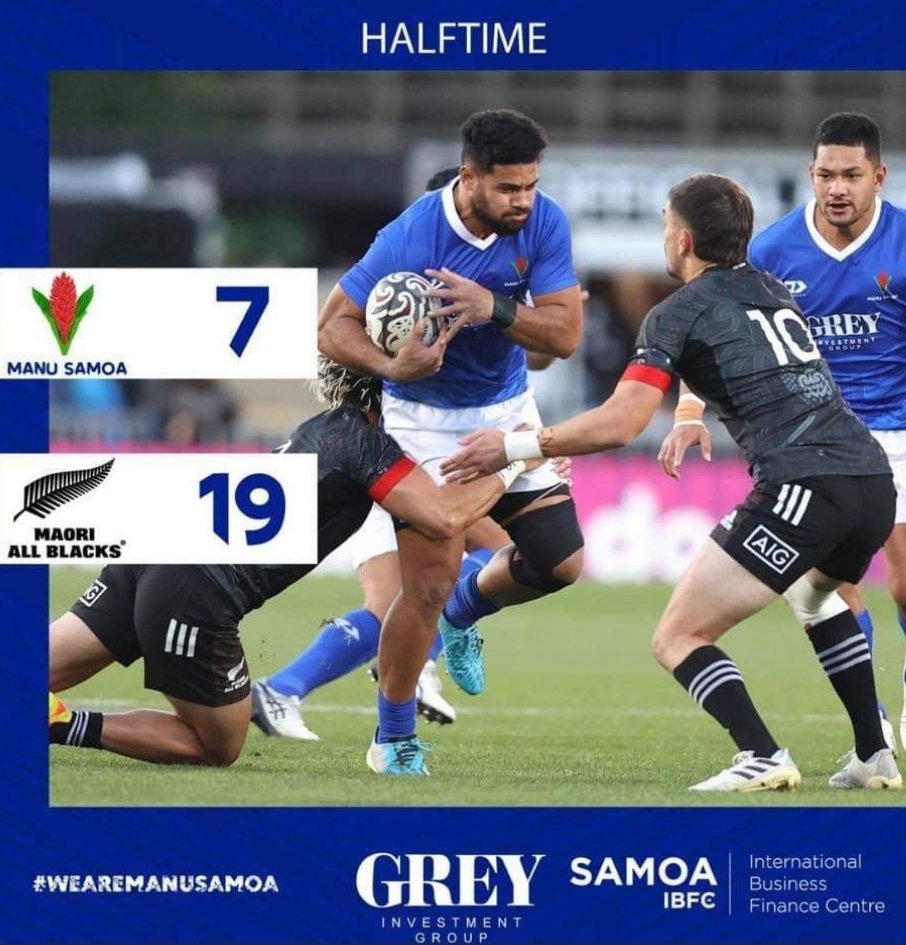 Just before halftime the Maori All Blacks again looked to their rolling maul. They go over the try line but the TMO was needed to determine a decision.

Video replay showed that Samoa held up the Maoris however it also revealed that Sam Slade collapsed the maul just centimetres from the line. Referee Mike Fraser awarded a penalty try and sent Sam Slade to the bin for 10 minutes.

To start the second half Auvasa Falealii sliced through the Maori All Blacks defence. With only 14 men on the park Samoa put the pressure on the Maoris. Falealii threw a flat ball to Alamanda Motuga and put Samoa just centimetres from the try line. It was Falealii again who threw a cheeky inside no look pass for Tomasi Alosio to close the gap to just 12-19.

In Maori All Blacks fashion, they weren’t going let Samoa take all the momentum. They answered Samoa’s 7 pointer with one of their own through Sean Wainui and the lead was stretched to 12 points.

Samoa outside centre Henry Taefu had the opportunity to close the deficit to 9 points but missed a penalty, though Taefu did have the kicking responsibilities for the Manu all night and converted 3 tries.

With possession, Maori All Blacks were all class as they strung together 14 phases over 60 meters to score, making it that much more difficult for Samoa to win.

Just like that it’s a blowout. Another penalty try and another yellow card conceded for Samoa. This time it was Genesis Mamea-Lemalu who knocked the ball out of the Maori players hand while he was on the ground and out of play, stopping a probable try according to referee Mike Fraser.

Down 38-14 it was now a fight for pride for the men from Samoa. They earn some possession and fight their way to 5 meters out from the try line.

Interchange halfback Jonathan Taumateine kept feeding his fowards. The pressure built and eventually it was too much for the Maori All Blacks as Kalolo Tuiloma secured a consolation try for Samoa.

Henry Stowers, who took up the captaincy when Alaalatoa left the field was Samoa’s standout player. He carried defenders with him all night, breaking the advantage line. Alamanda Motuga was a work horse for Samoa tonight; he tackled anything and everything and managed to win turn over ball for Samoa all night.

With two games together under their belts, Samoa now look to put together their strongest outfit next week for the World Cup Qualifying match against their Pacific bothers from Tonga.

The winner is decided on aggregate, meaning if there is one win a piece, then highest points scored across two games wins.