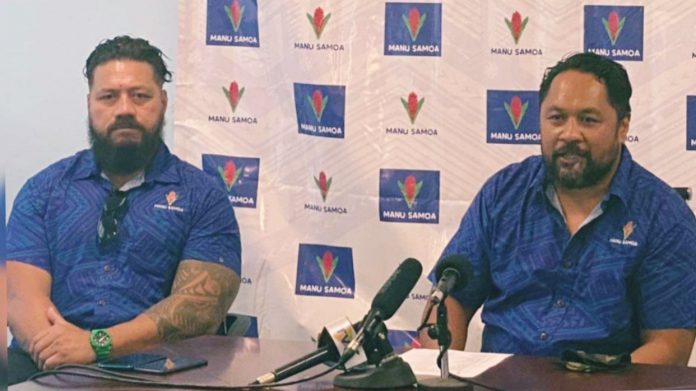 The Manu Samoa Head Coach Vaovasamanaia Seilala Mapusua held a press conference at the Samoa Rugby Union headquarters at Tuanaimato on Friday afternoon, following the naming of his team by Lapaki Samoa Chairman, Tuilaepa Dr Sailele Maliegaoi the day before.

Head Coach Vaovasamanaia opened the conference by expressing his excitement and full belief in his newly named squad.

“I believe this is a very good squad and one that will represent our country well but also looking into the bigger picture, the Rugby World Cup”.

The 30-man squad doesn’t have any local Samoan players, and when asked by local media, Mapusua said it was hard for him to pick anyone from Samoa because due to the covid pandemic, there have not been enough games for locals to play and train in for the upcoming Pacific Nations Cup.

Despite this inconvenience the Manu Samoa Head Coach said he urges local players to prepare themselves for upcoming international tournaments which are due to take place later in the year.

Vaovasamanaia says he has full confidence in his selection and believes this team will carry the team’s name forward.

Mapusua noted that Moana Pasifika’s participation in the Super Rugby comp has been critical for Manu Samoa, and says players selected from the team come seasoned and well trained.

“They should be in good shap after playing high level rugby right throughout the year”.

Vaovasamanaia says the coaching staff are excited with the range of players that are coming though with the likes of young talent such as Danny Toala and ex-Wallabie Duncan Paia’aua.

“It’s the first time I’ve been able to select a team full of professional players,” says Vaovasamanaia. “I can’t wait to get my hands on them.”

“It’s been a long time coming and long overdue, it’s great to get the first year out of the way..it was always going to be hard for them..they’ve had it the toughest out of all the Super Rugby teams,” said Mapusua.

The Pacific Nations Cup 2022 will be held in Fiji in July and include teams from Samoa, Tonga, Fiji and Australia. The Manu Samoa’s first game will be on the 2nd of July against Australia in Suva followed by Tonga on the 9th, and then host nation Fiji on the 16th of July.