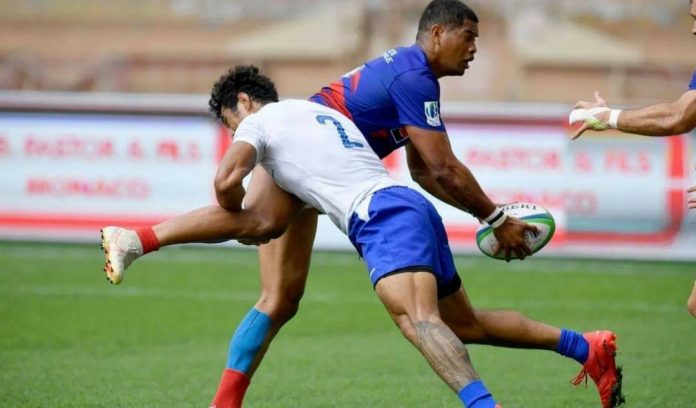 Samoa Sevens will miss out on the Tokyo Olympics after a gruelling semi final match against France.

The French came into the match as favourites and that’s exactly how they played in the first half.

The French starved Samoa of possession and limited them to just 3 possessions of the ball in the first half.

The pressure was too much for Samoa as France piled on the points. The French captain JJ Barraque notched himself a double while France’s top 7’s points scorer Terry Bouhraoua also crossed for a try of his own.

Behind 19-0 at half time, Samoa needed to be the first team to score. However the French came to play and didn’t give Samoa and inch of space.

Les Blues bullied the young Samoan side in the breakdown area and turned counter rucks into two tries which pushed the game too far for Samoa to come back from at 31-0.

Levi Milford did well to answer his country’s SOS call to act as injury cover. Injuries to Belgium Tuatagaloa and Uaina Sione meant Milford needed to be in the 12 that played. He played with heart in every match of the tournament and was Samoa’s only power foward all weekend.

Youngsters Steve Rimoni and Fa’afoi Falaniko were Samoa’s top try scorers over the weekend. They held their own against some of the world’s best 7’s players and did not back down when confronted by the pace and physicality of International 7’s. In defense, the two youngsters were seen chasing down experienced names in 7’s to make try saving tackles.

Veteran playmakers Paul Scanlan and Melani Matavao steered the young side around the paddock all weekend. Their footwork, speed and work rate on defence showed exactly why they are the team’s leaders.

Ireland has qualified for the one Olympic spot after beating France in the final.