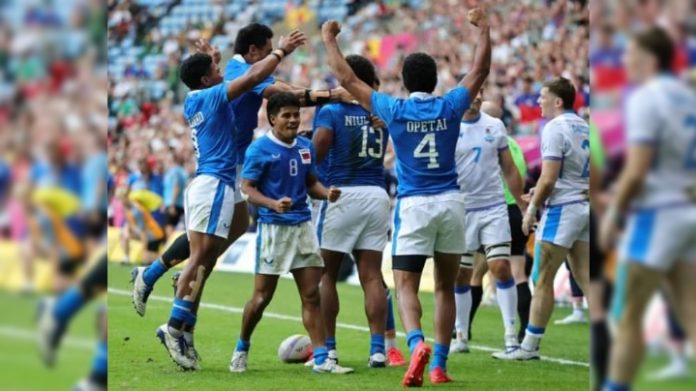 Your Manu Samoa 7’s have finished 5th at the Birmingham Commonwealth Games after a nail biting 24-19 win over Scotland.

It didn’t take long for Samoa to draw first blood. Securing the kickoff, Samoa launched into attack and put the ball into the hands of Owen Niue. The speedster from Salelologa’s Tamauli Rugby Club put on a massive fend on the face of Kaleem Barreto to slide through the defence and score Samoa’s first.

Scotland hit back with a try of their own when Robbie Fergusson picked up an offload from his teammate to bring Scotland within 2 points.

Leading 7-5, the men in blue were determined to go into halftime with more points. So what do they do? Put the ball into the hands of their leading top try-scorer, Steve Rimoni Onosa’i.

Rimoni-Onosa’i combined speed and power, proving too good for the Scottish defence as Samoa pushed ahead to a 12-7 halftime lead.

Samoa suffered two injuries in the first half, with Melani Matavao and Owen Niue needing attention on the field. This put pressure on Samoa’s defence with the referee failing to stop play on both occassions.

Whatever was said at halftime by the Scottish coach seemed to have worked. Scotland came out of halftime firing on all cylinders, scoring 14 points in 3 minutes to take a 19-12 lead.

Samoa needed a spark to win back the momentum in the match and that came via Tepatasi’s Fa’afoi Falaniko.

Falaniko showed off his left foot step, then went to a goose step to fool the Scottish defenders into tackling each-other.

Falaniko didn’t have the speed to finish his efforts but slipped an offload to the smallest man on the park, Neueli Leitufia, to score his first try of the tournament and the equalizer for Samoa.

With the score at 19-19 Samoa needed a big shift from it’s replacements to win the match and that’s exactly what happened when Levi Milford and Taunu’u Niulevaea came onto the the pitch.

Milford on the left edge took on a Scottish defender before an offload was released to debutant Taunuu Niulevaea who drew another defender, then popped up a spectacular offload to Neueli Leitufia in support play. Dubbed “little Uale Mai” by their Fijian cousins, Leitufia strolled over to give Samoa a 24-19 lead.

For the final minutes of the game, Samoan fans at home and around the globe held onto the edge of their seats as the Scottish, in possession of the ball, launched their own attack. Co-captain Vaovasa Afa Su’a, the oldest player on Muliagatele’s side led the defense with focused determination.

The Manu, without most of their starters, held onto the lead to secure 5th place at the 2022 Birmingham Commonwealth Games.