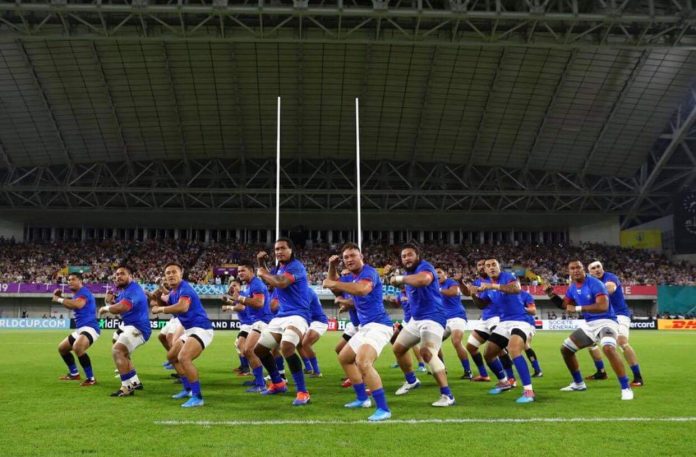 Manu Samoa have announced a side with 6 changes to the starting 15 that played Scotland in their 34-0 loss last week.

In a press statement Coach Steve Jackson says, “We just need to bring some new energy and excitement into this group;

“There are a couple of boys who looked tired last week. The changes are really to compete against a Japanese team who play the game pretty fast. So we want to put out a team that we think can go out and do the job.”

The big change comes in the first five-eight department. Ulupano (UJ) Seuteni has replaced 37 year old veteran Tusi Pisi. Pisi will look to have impact off the bench in a very important game for Samoa.

“I thought UJ played really well when he came off the bench against Scotland. He executed really well and took the ball to the line strong – so he deserves his opportunity,” says the Head Coach.

Veteran prop Logovi’i Mulipola has not been named in the 23 man squad boosting Jordan Lay from the bench to the starting position. Jordan Lay’s brother, James Lay has then been promoted to the bench.

“Piula, starting at lock, just gives us that sort of loose forward – lock speed around the park as well. And Jordan Lay has been outstanding for us for a period of time.”

Jordan’s younger brother James has been named on the bench and is poised to make his Rugby World Cup debut and Vaeluaga has a lot of positive things to say about the 25 year old debutant.

“Yeah, what an outstanding person first and foremost – what a great kid. You know he’s trained the house down, he never complains and we look for people who can come off the bench and change some things and hopefully he will do just that. He brings good energy and lots of good chat. James knows the game really well and he works hard.”

Seilala Lam of the Western Force gets his first opportunity to start for his country at hooker. While Ray Niuia hasn’t retained his starting position and will come off the bench.

Piula Faasalele who returned from a broken arm to come off the bench for the Scotland did enough to earn his first Rugby World Cup start. Faasalele will pair Kane Leaupepe at lock.

“He gives us that sort of loose forward – lock speed around the park as well. And Jordan Lay has been outstanding for us for a period of time.”

Manu Samoa’s only locally based player Melani Matavao has failed to be named in the 23 with Dwayne Polataivao coming back from a concussion to take back his number 9 jersey.

Ah See Tuala makes his Rugby World Cup debut for Samoa on the right wing. Tuala was named to start against Russia however was withdrawn late and replaced by Henry Taefu.