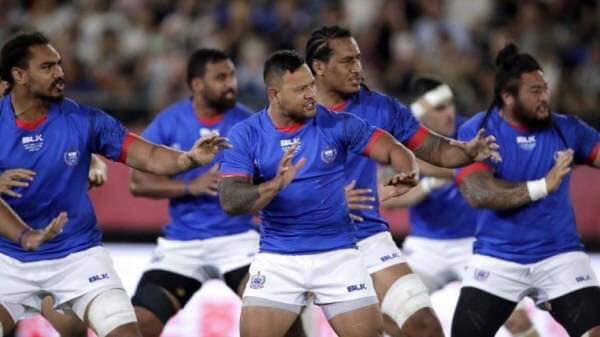 28 September RWC 2019 Japan.  Head Coach Vaaeluaga Steve Jackson has announced the Manu Samoa team to take on Scotland in a vital pool match for both teams.

Ray Niuia comes in at hooker for suspended Motu Matu’u who also looked to have needed a mandatory stand down for a concussion from last week’s match.

Captain Jack Lam is back from injury and will lead from the No.8 position, replacing Afaesetiti Amosa who sustained a tournament ending injury during a high tackle by Russian front rower Kirill Gotovtsev.

The only locally based player Melani Matavao of Aana Chiefs starts at halfback replacing Dwayne Polataivao who is also on a mandatory stand down period for a concussion injury.

Piula Faasalele is back from a broken arm and will come off the bench. He replaces Senio Toleafoa.

With Rey Lee-Lo suspended for 3 games there has been a shift in the back line. Alapati Leiua moves from wing to outside centre and will partner with Henry Taefu in the midfield.

This means Belgium Tuatagaloa earns a starting position on the wing and Kieron Fonotia is promoted to the bench.

In the fly half postion Ulupano ‘UJ’ Seuteni replaces AJ Alatimu on the bench while veteran Tusi Pisi will take up the role of orchestrating the troops in attack and defense against Scotland this coming Tuesday 01st October 2019, 15 minutes past midnight Samoan Time.