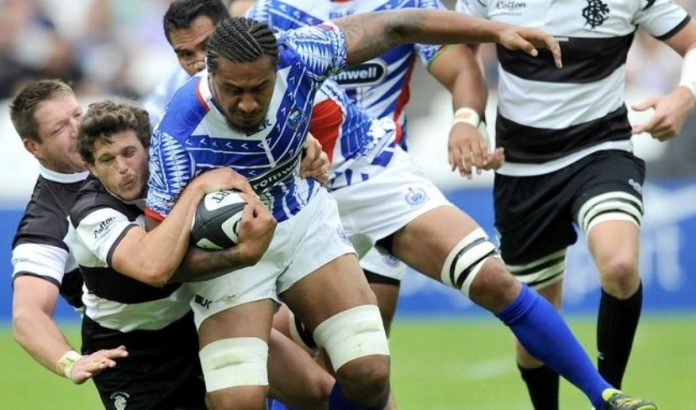 9 November 2021, Apia Samoa. Lakapi Samoa has announced the Manu Samoa squad to take on the Barbarians at Twickenham in London for the Killik Cup on the 27th of November.

The Manu Samoa Head Coach, Vaovasamanaia Seilala Mapusua has assembled a well-balanced team from the Northern Hemisphere, to represent Samoa in what is anticipated to be a tough and thrilling match.

This will be only the second meeting of the two teams. The previous encounter came ahead of the 2015 Rugby World Cup and was the first-ever rugby match to be played at London’s Olympic Stadium. The Baa Baas won 27-24 that day.

The Barbarian’s fixture is the only match to be played from the cancelled end-of-year tour of Europe due to Covid-19 restrictions, and the side has been selected from amongst Samoan players in Europe.

Vaovasamanaia says the team features a balanced mix of young and experienced players to face a robust and world class Baa-baas team.  “Some of the selected players will make their swansong appearances including veteran forward Joe Tekori, who has contributed immensely to the team over the years and currently still playing top level rugby in France,” said the Manu Head Coach.

Tekori is joined by Sakaria Taulafo currently playing at Rugby United New York in the United States, Viliamu Afatia playing in France, and Sinoti Sinoti who has been a UK fan favourite in his recent stint with the Newcastle Falcons.

“The team also features ten players making their debut, and a great opportunity for up and coming talents such as fly half AJ Alatimu to command the game at this level,” says Vaovasamanaia.

Unable to travel, the Manu Samoa head coach has selected a coaching and management staff from amongst Samoans in the Northern Hemisphere, to lead the team.

The Co-Coaches have been named as former first five Lemalu Tusiata Pisi, currently coaching at the Toyota Shokki in Japan, and former prop Census Johnston who is with Racing 92 in France.  The Assistant Coaches are former Manu lock Kane Thompson who coaches at NOLA Gold – USA (MLR), and former mid-fielder Terry Fanolua who previously coached at Gloucester RFC.

The Team Manager is Niuafolau Faautu Talapusi, a Samoan woman who has been around rugby all her life, and has also managed at local rugby level with her village side, BBE Vaiala Ulalei Club.

The Head Coach says he is working virtually on preparations with the team, and they are under no illusions at the enormity of the task ahead in the match against the Barbarians.

“I do believe we have selected a well-balanced, exciting group of players who have a great opportunity to add to the rich history of Barbarians matches;

“I am excited for the management group and players for the opportunity to play at HQ and also for our supporters and fans that Manu Samoa gets to take the field for the last international match of 2021”.

Vaovasamanaia will be cheering the Manu Samoa on from Samoa, and says he is excited “for what will be a thriller of a performance”. “Congratulations to everyone on their selection”.

The match has also been announced as a platform to launch the Manu Samoa’s new partnership with apparel sponsor, Castore.

This will be a double-header event, which includes the Barbarian Women v Springbok Women’s XV match following the men’s match.