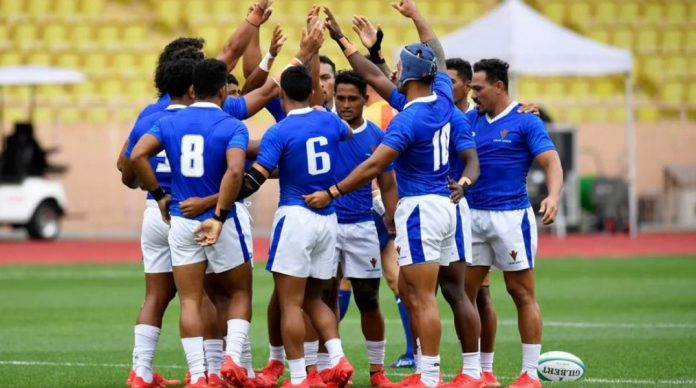 Samoa and Ireland have three victories a piece in Pool A of the Olympic repechage tournament in Monaco, boosting the hopes of both nations to qualify for Tokyo.

The boys in blue have secured a semi final spot sitting level on points at the top of Pool A with Ireland. The decider of who goes through as top seed will be determined when the all-locally based Manu 7’s meet Ireland tomorrow (tonight 12.30am on TV1 Samoa for local viewers).

Samoa racked up 23 tries, scoring almost 150 points on a sensational day which started with a 69-5 thrashing of  Mexico before a 47-5 win over Tonga.

In the third pool match it was again Va’a Apelu Maliko who continued his streak of scoring the first try of a match by opening Samoa’s accounts against Zimbabwe.

Maliko looked to have no space on the left edge until he managed to sneak his way around a Zimbabwe defender to find himself under the post.

Leading 7-0, the men in blue went straight on the attack through captain Melani Matavao who found space and power in his legs to run away and score Samoa’s second.

Va’a Maliko once again showed why he’s the best player in Samoa after going in for his second try, leaving a trail of Zimbabwe defenders in his tracks.

Samoa extended their lead to 28-0 by way of Fa’afoi Falaniko before a yellow card to Steve Rimoni allowed Zimbabwe to score a try of their own before halftime.

The second half was rather underwhelming by the Samoans, scoring only one try though they still swept Zimbabwe away with a 33-7 triumph that featured doubles for Falaniko and Maliko.

Samoa tried a lot of new tricks but were not able to execute any to perfection in a second half riddled with handling errors.

However, Samoa have done enough to stay on top of their pool after day 2 and a chance for the youngsters to regroup before the match with Ireland.

The top of the pool clash against Ireland will take place on the same day as the semi finals.

Manu Samoa 7’s last pool game against Ireland will be aired on TV1 Samoa at 00:30hrs (21st June) or you can watch it live on the World Rugby Fb page.