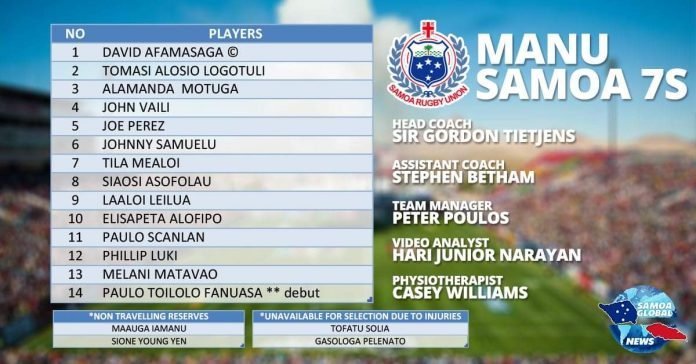 15 May 2019,  Apia Samoa.  The Manu Samoa 7s management has named their team for the Paris and London legs of the HSBC World Sevens Series.

Named as the 14th player, Paulo Toilolo Fanuasa from the Big Island of Savaii will be looking to make his debut for the National 7s team. Captained by David Afamasaga the side misses out on power forward Tofatu Solia who is still out with an injury.

The London – Paris legs are the last 2 tournaments of the 2018-2019 world series and the Manu Sevens side is currently at 6th place with 87 overall points.

Leading the table is USA at 145 points followed closely by Fiji at second place with 142. New Zealand is at third place and 130 points while South Africa is in fourth place with 121. Samoa trails  behind England at 5th place and 107 points.

The Sir Gordon Tietchens coached Samoa Sevens side has not secured a tournament win this season, their best performance being a runners up trophy in Las Vegas.

A win is 22 points, runner up 19, and third place 17. Samoa will have to secure quarter final spots in both legs to maintain their current ranking of 6th place.

Mt Silisili Conquerors say its not for the Faint Hearted

Epileptic Mother and Her 3 Year-Old Daughter Now Missing for 3...

The sun sets in the Republic of Nauru, the smallest state...