Manu Samoa’s 7s squad of 20 players and six management who had all contracted covid-19 have all fully recovered and are back in full swing training.

Speaking to SGN from Dubai where the team have set up camp, Head Coach Muliagatele Brian Lima said the players as well as his management team have all recovered from what has been confirmed as the omicron variant of Covid-19.

“Most of the squad didn’t get any symptoms at all, just only a few had a bit of a fever, but mostly just flu-like symptoms. But now after repeated negative tests, we’re back into full swing training now”.

Samoa’s 7s squad were set to travel from Dubai to Malaga Spain for their first appearance at an HSBC World Series tournament when Covid-19 struck. The compulsory pre-departure testing had returned positive tests for 13 players and 2 management. The team went into self-isolation in their hotel rooms and missed the two January legs of the HSBC world series – Malaga, Spain on 21-23 January and Seville, Spain on 28-30 January.

“That was really disappointing for us especially the boys who worked really hard to prepare for their first hit-out at an HSBC tournament,” said the Head Coach.

Muliaga says his squad is mostly made up youngsters who’ve never even travelled out of Samoa before. “We really needed those two tournaments to get the boys exposed to this level of competition… that’s the ongoing challenge for Samoa, our players need regular quality tournaments to play in.”

Now fully recovered, Muliagatele has the team back to its normal training regime, but the HSBC calendar of tournaments has changed again.

“The plan was to also attend the Canada and Los Angeles legs this month, but after we arrived in Dubai they announced that both of those tournaments were cancelled, they pushed them both back, so the next HSBC tournament is not until April now…”

Singapore is currently scheduled for the weekend of 9-10 April with Vancouver now announced for 16-18 April. The May tournaments have been confirmed for Toulouse France 20-22 May and London 28-29 May.

Muliagatele said the team is in good spirits and the challenge now is to maintain player interest in training with Singapore being 60 days away.

“It’s an unfortunate situation for us, but we’re not the only ones affected. Fiji and New Zealand also missed out Spain,” said Muliagatele.

“The key for us now is the mental health of players. It’s hard on them when we training them hard for tournaments, and then plans change or tournaments get cancelled”.

The Head Coach said he wants to reassure the families and especially spouses and parents of players, that player welfare is the main focus of his management. “Our management is focusing on our players and doing everything we can to ensure their safety and well being”.

Muliagatele said Management have to take a more cautionary approach to training like making sure they are not scheduled at the gym or at fields with other teams. “And that sometimes means we have to run our gym sessions at night time..”

The Samoa 7’s Coach said these are also difficult times for their sponsors especially the Samoa International Finance Authority (SIFA) who’ve been loyal supporters of the Manu Samoa 7s for many years now.

“We’re grateful to SIFA for their ongoing support during these difficult times. We know that we have to be playing tournaments for our sponsors to get the mileage and we pray for their patience as we try to manage the situation here one day at a time,” said Muliagatele.

The Head Coach thanked the nation for their prayers and said he wants to reassure the families and especially parents and spouses, that player welfare was a priority for Management.

“Thank you Samoa for your support. Your prayers are felt here in Dubai by the whole team. Faafetai tele mo talosaga”.

The 20-man travelling squad is a mix of youngsters and experienced players, as well as a few veterans recalled into the squad. 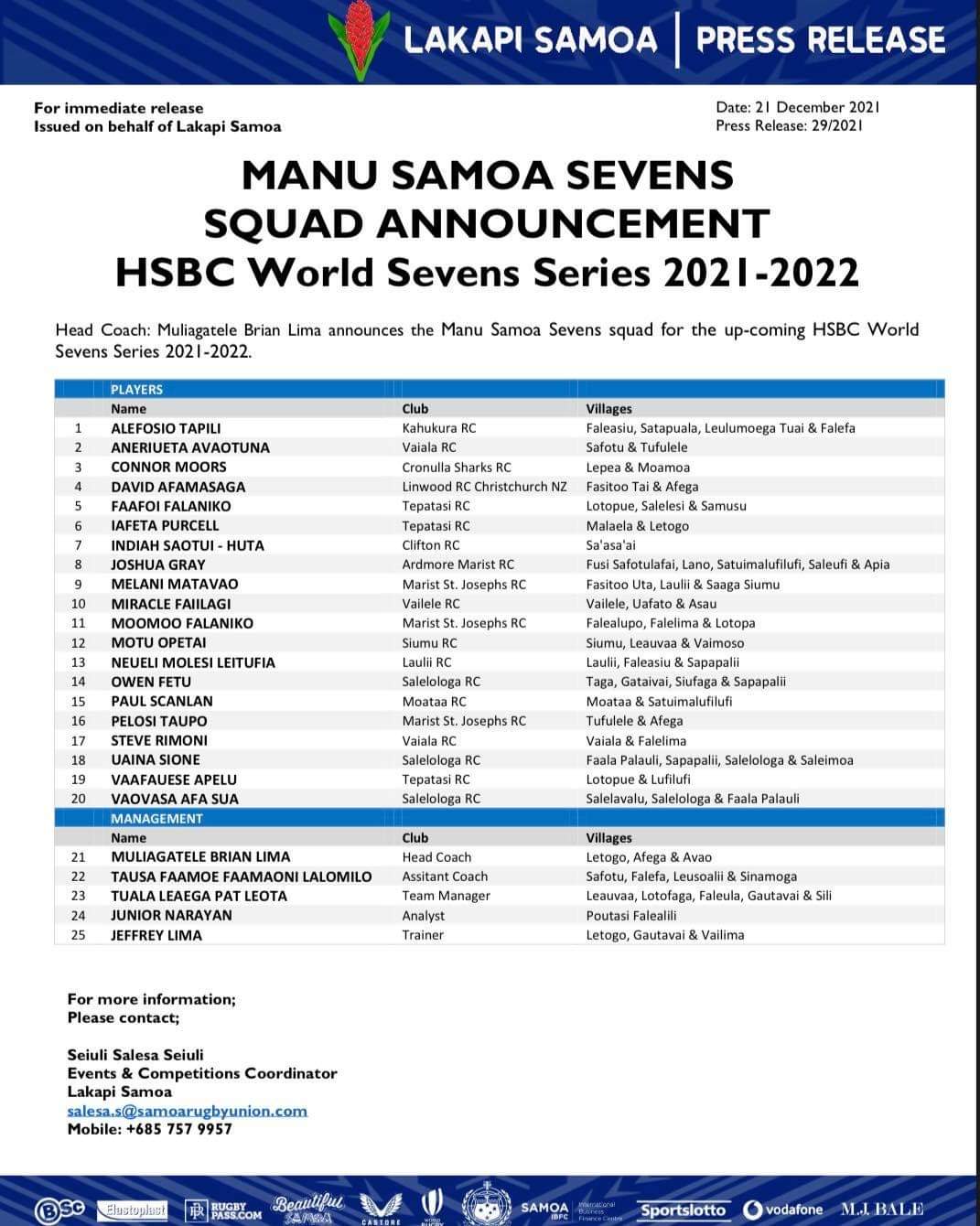