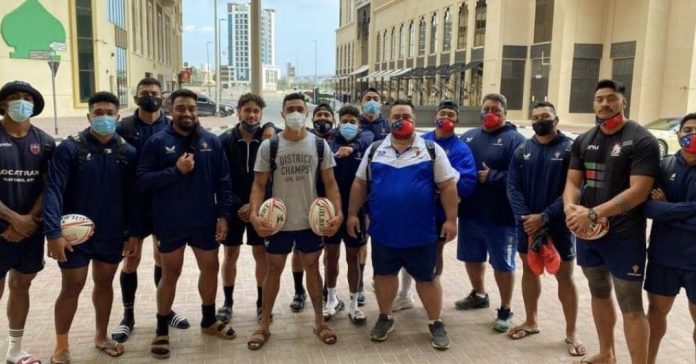 Lakapi Samoa has today confirmed that its Manu Samoa 7s Squad of 20 players and six management currently in a holding camp in Dubai will not be able to compete in the first of two HSBC legs scheduled for Malaga, Spain this weekend.

Lakapi Samoa Chief Executive, Faleomavaega Vincent Fepuleai confirmed that, “Due to a high number of positive
Covid test results in the squad before departing for Spain, the team will not be able to participate in the Malaga event”

According to the CEO, the Manu Samoa 7’s squad was forced to cancel its travel plans to the tournament after 13 players and 2 management returned positive test results from the mandatory pre-departure pcr-tests conducted.

“We are disappointed at this latest situation but the protocols and measures in-place for the safety and welfare of everyone involved is paramount.”

Lakapi Samoa together with the team management is liaising daily with World Rugby and the hosts in Spain.

“We acknowledge their support as we monitor and assess the team’s situation over the next couple of days”, adds Faleomavaega.

The Lakapi Samoa CEO says the team intends to participate in the next leg of the HSBC sevens.

“Further testing will be conducted as required in compliance with the protocols to ensure everyone is clearedso the team can return to train safely with the intention of participating in the Seville 7s in the following week.”

Faleomavaega assured the families of players and management that they are taking all precautionary measures and receiving medical assistance whilst in camp.

Contacted for a statement Manu Samoa 7’s Head Coach Muliagatele Brian Lima said the players are in good spirits and noone is showing any severe symptoms of the coronavirus.

“We are all well and those affected just have symptoms of the common flu.”

“We are very disappointed to not compete in this first tournament.. the players and all of us were looking forward to participating. But all is well here in Dubai and the families don’t need to worry”.