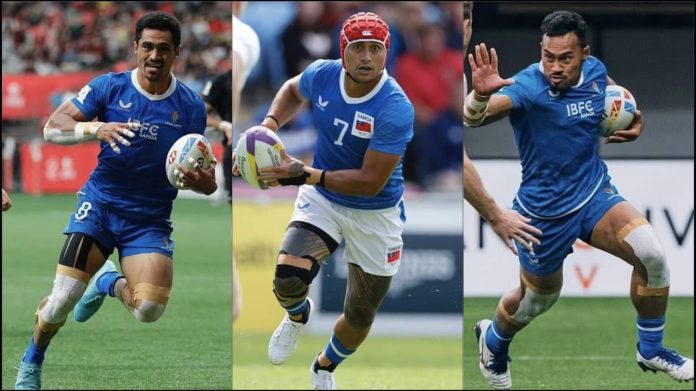 The Manu Samoa Sevens have gotten off to a good start at the LA Sevens, defeating Kenya by 33-14.

It took 3.5 minutes for Samoa to score the first try of the match. Solid defense, quick to breakdowns and patience in attack eventually put Vaafauese Apelu-Maliko over the tryline, having received a clean ball from an Owen Niue breakout down the middle.

A conversion by Melani Matavao put Samoa in the lead 7-0.

The Kenyans hit back when Buffalo Alvin Otieno took the kick off ball and caught Samoa’s defense off-guard with a run down the sideline that looked to be a sure try, if not for Super Captain Melani Matavao.

Matavao chased down the Kenyan Buffalo, makes a try-saving tackle in Samoa’s 22, and then gets back on his feet to skillfully regain posession for Samoa.

The ever reliable Uaina Sione was there to assist and Co-Captain Vaovasa Afa-Sua pulled a strong run to get Samoa back into the right end of the field.

Samoa strikes again before halftime with a well-deserved try to HSBC Dream Team forward, Uaina Sione. Sione pulled a quick tap after two minutes of continuous play to captialise on a tired Kenyan side.

Coming back from the break, Kenya gained an early penalty inside Manu’s 22. Kenya’s DHL Impact player Daniel Taabu pulled a dummy and cut through the Manu defense to score under the sticks. 19-7.

Off the kick-off, Taabu once again found gaps in Samoa’s defense and set up Willy Ambaka to score in the corner. A successful conversion and the score is suddenly 19-14.

The Men in Blue stayed focused and regrouped. Paul Scanlan takes the kick-off and the Manu take the ball wide. It returns to Paul Scanlan who cruises over to for a try that settles the nerves of the strong Samoan contingency of supporters in LA and across the globe.

With a minute left on the clock, Samoa maintain possession of the ball until Vaafauese Maliko dances around the Kenyan defense. He makes the break and looked to score a hatrick, but instead, he hands the ball to Taunuu Niulevaea, who had just come onto the field in place of Afa-Sua for his first ever HSBC Sevens match.

Niulevaea goes down as having scored a try at his debut, and Samoa wins 33-14.