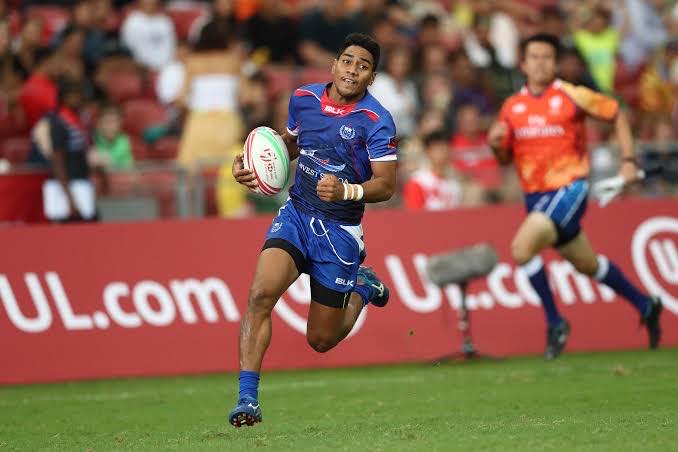 The Manu Samoa 7s players were able to walk onto the field before their first HSBC World Series game against Canada to show their support as Samoa battles to contain the measles outbreak.

Both teams traded high tackle penalties before Canada put together a good set of phases to place captain Nathan Hyriama under the post.

Trailing 7-0, Samoa’s Paul Scanlan sliced through the Canadian defence and handed off to his Captain Tomasi Alosio who dished it back to Scanlan for a brilliant first try of the season.

Poor defence by Samoa meant Canada snuck their noses back into the lead at 12-7.

Samoa regained possession through a penalty that allowed Tofatu Solia to power his way through three Canadian defenders to tie up the game at 12-12 at halftime.

Joe Perez got himself sin binned for a high tackle soon after half time.

Samoa were lucky to have leaked no points in the 2 minutes Perez was off the field.

With 3 minutes left in the game it was back to a level 7 on 7.  Substitute Elisepeta Alofipo spotted tired Canadian defenders and put on the footwork to score an easy try and put Samoa ahead 19-12.

With no time left on the clock Canada were inches away from leveling the game. A solid defence by Captain Fantastic Tomasi Alosio forced a knock on to seal Samoa’s first win of the season.