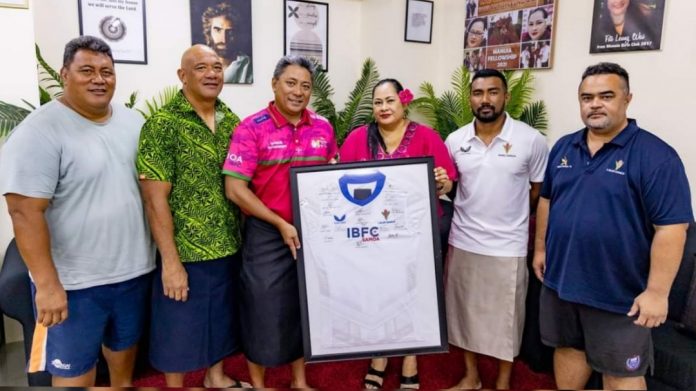 The Manu Samoa 7s management visited local businesses this week to show their appreciation for acts of kindness shown towards their team throughout the past season.

At Samoa Stationery and Books (SSAB), CEO and founder, Tofilau Fiti Leung Wai and her husband Tuatagaloa Aumua Ming Leung Wai, received an appreciative gesture from the Management of the Manu Samoa 7s for SSAB’s continued support of the team.

Earlier this year SSAB hosted a special luncheon for the Management and Players where the company made a donation to assist with the team’s preparations.

CEO Tofilau and Tuatagaloa Aumua are grateful for the gift from the Management and said SSAB will continue to support the Manu Samoa 7s Team.

“We wish you all the best as you train and prepare for the remaining games of this year, and heading into the new HSBC sevens series,” said CEO Tofilau.

Other companies visited throughout this past week included Leota Lene of Siva Afi and Fata Paul Loibl of Loibl Auto Parts.

“There were so many companies and individuals not only in Samoa but overseas who showed us support and acts of kindness,” said Manu Samoa 7s Manager Tuala Leaega Pat Leota.

“We’re taking some time out between training sessions to visit local business owners, to thank and acknowledge the donations given and support they continue to show towards our nation’s team.”

The Samoa International Business Finance Centre are the major sponsors of Samoa’s 7s team. SIBFC promotes the International Financial Services and Wealth Management Solutions offered by Samoa and are the current front-of-jersey sponsors for the team. The relationship, however, goes back for more than ten years under SIFA.

The Manu Samoa 7s ended their 2022 season having revitalised fan support for the national team after four years of reaching its lowest level ever recorded under Sir Gordon Tietjens.

Coached by Muliagatele Brian Lima and Tausa Faamaoni Lalomilo, the side finished in the Top 8 of the World Cup which will seed them in a better place for the 8 pools of the next world cup tournament.

The team of all-local players and mostly youngsters who turned 21 while on tour throughout this past year, have taken Samoa’s overall HSBC World Series standing from 13th to 9th place.

This was achieved from attending just five tournaments, having missed the first four due to covid. Had Muliagatele’s side attended and received points from tournaments missed, the achievement of the young side of debutants would have edged up a few more places.

The team are back into full swing training in preparation for the next season of the HSBC 7s and Oceania tournaments.

Hong Kong will host the first tournament of the new season, set to kick start on the 4th of November 2022.