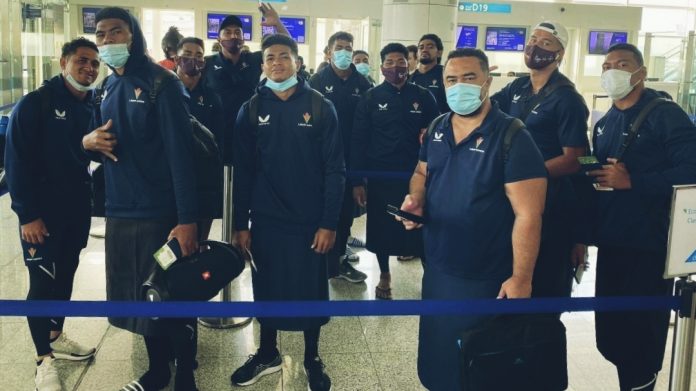 The Manu Samoa Sevens team have departed their training camp in Dubai for the last leg of the HSBC World Sevens Series scheduled for this coming weekend 27-28 August 2022 in Los Angeles.

The team departed Dubai to travel to Los Angeles with a transit in Instanbul.

Samoa will be pooled with England, Scotland and Kenya in LA. The Manu have recently met both England and Scotland at the 2022 Commonwealth Games where they left England tryless by 34-0 and edged out Scotland 24-19 to secure 5th place in Birmingham.

Samoa is currently ranked 10th on the HSBC World Series standings as they head into the final tournament of the 2021-2022 season.

The Manu 7s have achieved this ranking from attending just four tournaments.. having missed out on the first four due to travel restrictions and Covid-19.

The Manu Samoa 7s squad of players and management have not returned home since the Commonwealth Games. The team travelled from Birmingham to Dubai to await the LA 7s. After LA the Manu 7s will look towards the Rugby World Cup in Capetown South Africa on the 9th-10th September 2022.

The playing squad for LA has not been named. Muliagatele Brian Lima’s squad is primarily made up of young players who have all been selected out of Samoa’s local Vodafone National 7s series.

All but four squad members have played in previous HSBC 7s tournaments. For the rest of the squad, the past few months has been their first experience of international rugby.