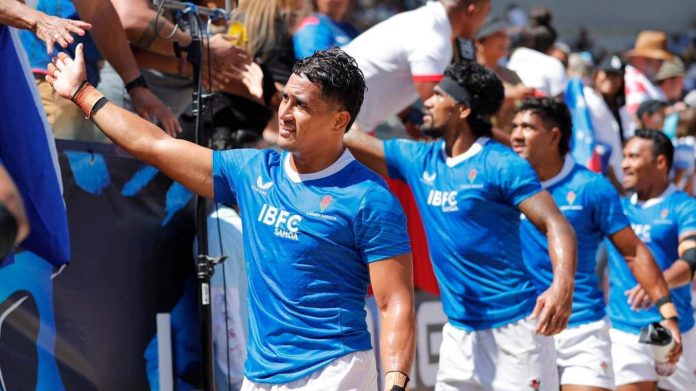 Manu Samoa 7s have ended their 2022 season of revitalising fan support for the national team with a Top 8 spot in the World Cup and 9th overall in the HSBC World Series standings. 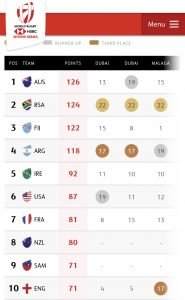 The last match for 7/8 at the Rugby World Cup saw a 35-7 loss at the hands of South Africa. The 14 minutes did not reflect the season’s effort from the all-locally based squad.

The Springboks came into the match with a lot to play for. They wanted to give their home crowd a win after local fans had endured two successive losses at the quarterfinal and 5/6 place semis. Secondly, it was the last match for South Africa’s long serving Head Coach, Neil Powell, who had announced his retirement after the match with Samoa.

On the other side of the spectrum was a Samoan side who all looked ready to return home after a long season. The Men in Blue looked lethargic on defence and lacked energy on attack.

From the first kickoff of the match South Africa secured possession and took a 7-0 lead. Soon after that, a beautifully executed set-piece chip and chase saw Angelo Davids score under the post.

At 14-0 Samoa still had a chance to win the match. However on the stroke of halftime a “nail in the coffin” moment struck when Samoa conceded a penalty try.

in addition to the automatic 7 pointer for South Africa, the referee sends Paul Scanlan to the sin bin for the offense, in a double whammy for Samoa. No replay was shown of the offense as teams went to the break 21-0.

Starting the second half with six men was a huge ask of the Manu 7s. The youngsters just did not look like the same team fans had been blessed to witness all season.

After half time, the Blitzboks took full advantage and laid on 14 more points, as Samoa’s try-scoring machine Steve Rimoni Onosa’i was forced to leave the field with an injury.

The Manu played with heart. Determined to not end the match with zero points.

in the last minute Samoa strung together their best piece rugby of the match and in no surprising manner, they scored via Va’a Apelu Maliko.

Samoa will now fly home after months of travel in a season where they had been forced to make Dubai their home due to covid travel restrictions.

The team of all-local players and mostly youngsters who turned 21 throughout the year, have taken Samoa’s overall HSBC World Series standing from 13th to 9th place. That was achieved from attending just five tournaments, having missed the first four due to covid.

At the Rugby 7s World Cup, the Muliagatele Brian Lima coached side have moved Samoa into the Top 8.

The Manu Samoa 7s will now travel back to Samoa and continue to train for the start of the 2022/2023 season.

Hong Kong will host the first tournament of the new season, set to kick start on November 4th 2022.