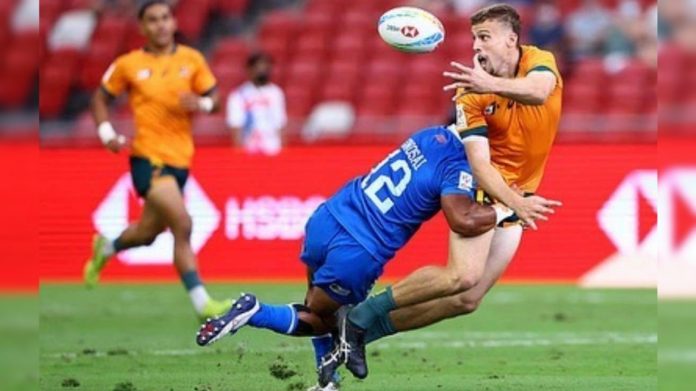 Manu Samoa 7’s have fallen out of medal contention at the Birmingham Commonwealth games after a narrow 7-0 defeat at the hands of Australia.

The young men from Samoa were valiant in their efforts to advance to the semi-finals.
Australia held the ball for the majority of the match and made Samoa work hard on defence.

The first half finished at nil-all after neither team could cross the tryline.

Australia had come close to scoring in the first half but were denied by a last ditch try-saving tackle by Tepatasi’s Va’afauese Apelu Maliko.

Samoa had an opportunity to take the lead before halftime despite having no possession of the ball for the first 7 minutes. However, a miscommunication by Melani Matavao and Steve Rimoni prevented Samoa from taking the lead against the momentum.

With so many tackles being made in the first half, Head Coach Muliagatele Brian Lima brought on fresh legs at halftime in Fa’afoi Falaniko.

In spite of the changes made, Australia weren’t fazed and snuck their noses in front when Matthew Gonzalez cut through the defense to put the first 5 points on the scoreboard.

Samoa worked hard and there were several chances to equal the score, but the young players weren’t their usual calm selves, and just could not execute that last percent needed to complete a try.

Two minutes into the second half, the stellar Samoan defence forced the Aussie’s to make an error that led to an yellow card for Australia.

But despite their best efforts Samoa just couldn’t crack the Australian defence, as the Aussies did their best to slow the game down.

One last wave of attack by Samoa right at the dying minutes looked to be the time for them to finally score, but even that was tamed by the Australians. Steven Rimoni went for a kick-and-chase, but was slow off the mark with an undetected Australian player holding him back as he tried to chase down the field.

The Aussies now advance to play South Africa in the Semi-Finals while Samoa will now have to play Canada in the 5-8 semifinal, scheduled for 12:20am Monday morning (Samoa time).