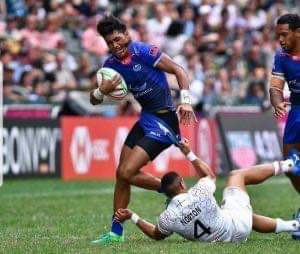 Manu Samoa 7’s must finish day two of the Sydney HSBC 7’s with only 10 players.

As reported in the Manu Samoa 7s page, the men in blue lost Tamauli’s Uaina Sione and Aana Chief’s Tuna Tuitama to injury.

Just hours before Samoa kicks off Day 2 in Sydney against South Africa, it was announced that Losi Filipo and John Vaili have also been ruled out of the Sydney 7’s following injury assessments this morning.

That brings Samoa’s injury total in the the last two weeks to five with Alamanda Motuga having to fly home last week after the Hamilton 7’s.

That essentially means the Manu Samoa 7s squad is down to 9 players for the rest of the tournament.

Tautua Party Launches Manifesto of “Justice and Prosperity for All”

Man Pleads Not Guilty to Murder

Tautua Party Launches Manifesto of “Justice and Prosperity for All”