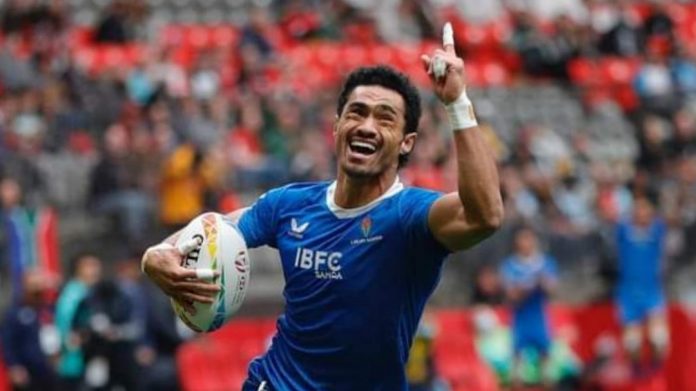 Manu Samoa 7’s have gone through the pool stages in Toulouse undefeated after beating South Africa 19-7.

South Africa came into the match with a chip on their shoulders after Samoa dismantled them in the quarterfinal of the Vancouver 7’s a month ago. Despite the South African intent, the young Samoa side were not phased whatsoever.

Samoa spent the first 3 minutes of the match without the ball, however, the Manu’s first touch of the ball, and none other than Va’afauese Apelu Maliko did his magic. The Co-Captain chipped ahead, regathered the ball himself, and then backed his pace to put Samoa up 5-0.

At the very next play South Africa’s kick-off spills the ball into the hands of Tepatasi’s Va’afauese Apelu Maliko once again. This time he was in full flight, and went over untouched for his 4th try of the tournament.

Melani Matavao slotted the conversion from out wide to take Samoa’s lead to 12-0.

South Africa found possession again and pinned Samoa deep into their own half. But the men in blue defended mightily and turned the ball over.

Steve Onosai Rimoni put foot-to-ball and showed off his pace to give Samoa a 19-0 lead at halftime.

South Africa showed why they are the current leaders of the HSBC 7’s World Series by scoring first straight after halftime.

Now with the momentum, the Springboks launched wave after wave of attack. However, there was no way through the solid wall of the Samoan defence, led by the smallest man on the park, Neueli Leitufia, who kept forcing errors from the Blitzboks.

Samoa held on to their 19-7 lead to snatch their second straight win over the HSBC series leaders.

The Manu advances to the quarterfinals with Ireland from their pool – and South Africa misses out on the Top 8 for the first time in 9 years. The New Zealand All Blacks have also been deprived of making the quaterfinals from their pool – a first ever for NZ in the history of the world sevens series.

Samoa will now play the 2nd seeded side of Pool A at 5:48am Samoan time. This could be either Canada, England or Argentina depending on results.