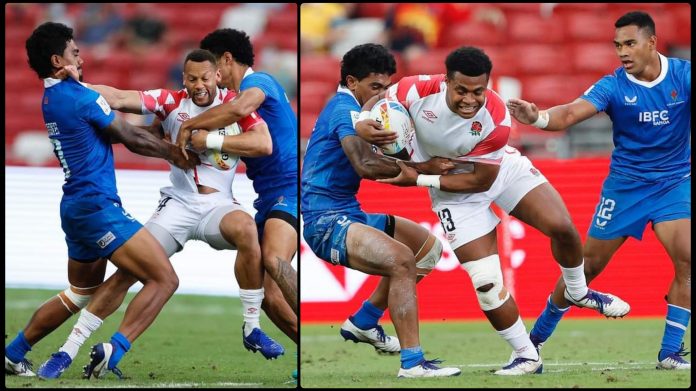 9 April 2022, Apia Samoa. The boys in blue took the pitch for their second pool match of the HSBC Singapore 7’s against England and told the world they are back with a 31-5 annihilation of the 7th placed side.

Whatever Head Coach Muliagatele Brian Lima and his Assistant Coach Tausa Faamaoni Lalomilo said to the boys in a refocus session after the match against Australia, it worked! The Manu Samoa side ran out onto that field with a confidence and a purpose to win, and convincingly they did.

Samoa started the game off on the receiving end where minor mistakes left the ball in England’s possession. Deep in their own half, they had to apply the pressure on defence which they did, forcing a turnover penalty taken at a line-out.

After a sloppy throw-in Steven Onosa’i who scored a double against Australia, was quick to redeem the situation. With ball-in-hand, he chipped the ball over the defensive line and chased it down. Speeding through the defense Onosa’i gathered the ball and beat the England defense to the try line to put Samoa on the scoreboard first, and register his third try of the world series.

At the very next possession, the Manu took the ball from coast to coast for Tepatasi’s Vaafauese Apelu Maliko to score in the corner after a cheeky assist from fellow Co-Captain, Melani Matavao. The veteran 7’s pair looking fitter and sharper than they ever have in their careers.

Next up, Samoa turned their defense into an offensive opportunity after forcing yet another turnover. A quick tap of the ball got the boys deep into English territory where Tamauli’s Uaina Sione took a comfortable dive for a last minute corner try that ended an action-packed first half at 19-0.

Manu Samoa seemed to turn up the energy and intensity in the second half, scoring off an early chip and chase try. This time, it was Captain Melani Matavao who sped past the English defense to ground the ball while being tackled. The referee took it to the TMO but this only gave the fans a closer look at Matavao’s scoring prowess as he grounded the ball under pressure.

The Manu capitalised again off an English mistake to get the ball out to debutant wing Owen Niue, who cut into the midfield and sliced right through the English defense to score his first try of the series.

In the last seconds of the match Faafoi Falaniko registered Samoa’s first yellow card of the series. With a man down on the pitch, England were finally able to penetrate Samoa’s defense, finding an overlap to get a consolation try and end the game with a whopping 31-5 on the scoreboard.

The Manu put on an absolute scoring clinic out there in their second only match back after two years. Lima’s squad of 4 veterans and 9 debutants have their final pool match against Spain at 11:07pm (Samoa Local Time).