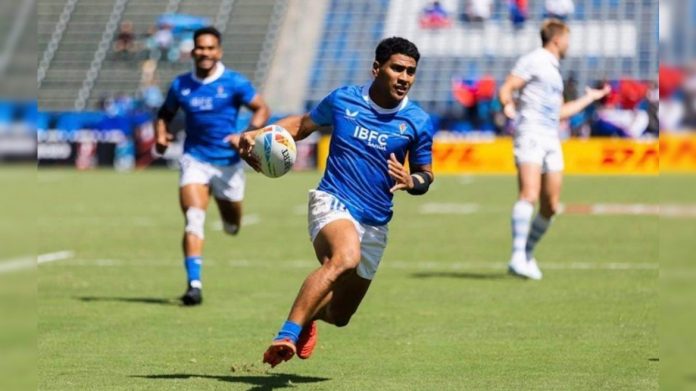 Fiji backed their defence right from the start with a deep kick off, gifting Samoa possession.

Samoa managed to string together multiple phases but the Fijian defence wouldn’t break.

Fiji finally got hold of the ball but seemed to relaxed and ended up spilling the ball onto the foot of Paul Scanlan.

Steve Onosa’i came through with the chase and beat a Fijian defender to the ball to score the first try of the match.

5-0 was never going to be enough to put away the two-time Olympic champions.

The Fijian defensive line was solid and on attack, slippery offloads riddled their attack strategy. Moataa’s Paul Scanlan did manage to break the advantage line everytime he touched the ball but the Fijians were always quick to shut down the elusive speedster.

Fiji went on to score 21 unanswered points in vintage Flying Fijian style. Offloading from one Fijian to another until the ball found the hands of Jerry Tuwai who strolled over for Fiji’s first try.

Fiji ran a beautiful set piece move that saw Kaminieli Rasaku run a scintillating line to slice through Samoa’s defense untouched and score from 70 meters out.

The nail in the coffin came via a Samoan error that gave Fiji prime field possession. From there it was a simple play of hands to Mocenacagi who flopped over the white line to bring the score to 21-5.

Steve Rimoni Onosa’i crossed over for Samoa to bring the score to 21-10 with the clock ticking down to two minutes left.

Instead of rushing to chase points, it was another crucial error from Samoa – when they failed to kick off within 30 seconds. Fiji kept possession until the time ran out, then kicked the ball out at the sound of the hooter.

Hosts South Africa have also bowed out as Cup contendors with a 24-14 loss to Ireland. Ireland will meet New Zealand in the other semi-final.

Samoa still have matches at the Rugby World Cup, for the 5th-8th place Semi Finals. 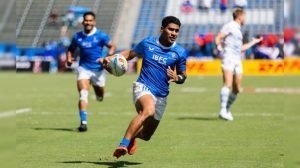