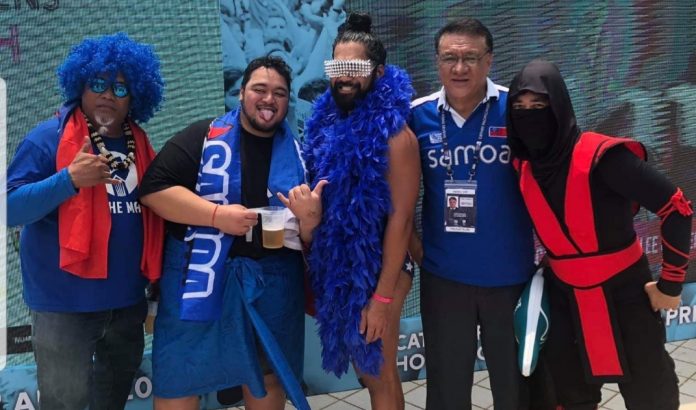 06 April 2019, Hong Kong. Loyal Manu Samoa Sevens fans in Hong Kong celebrate as our Men In Blue advance to the Cup Quater finals of the Hong Kong 7s after two days of rugby.

With the slogan, “Nobody Does Sevens Like Hong Kong” this leg of the HSBC world series boasts the best atmosphere for fans. The Manu Samoa 7s team has loyal fans who travel into Hong Kong from around the globe every year for the tournament.

Samoa 7s kicked off the tournament with a game against Scotland. With Tila Mealoi and Laaloi Leilua both being yellow carded in the first 4 minutes of the game, the alarm bells went off early for Samoa. Samoa kept discipline and impeccable defense when they were down in numbers and went into half time down by only 7.

Manu Samoa came back in the second half cool calm and collected to score 17 unanswered points and take the game out 21-7.

Day 2 of the Hong Kong 7s started with our Manu 7s taking on a valiant Japan side. Samoa drew first blood straight from kick-off by way of Alamanda Motuga. Although taking the lead early Samoa went into half time up by only 3 with a score of 17-14. Japan tried to fight back in the second half but the Manu 7s outclassed them running away with the match 31-21.

Coming off of two wins our Manu 7s were full of confidence. However they were facing an on-form South African team who are the reigning HSBC 7s Champions.

The battle for the top of Pool A took a while for points to be scored. The Blitzboka’s scored first in the 5th minute and went into halftime 14-0.

Samoa being starved of position South Africa took full advantage and ran out to a 21-0 lead. Manu Samoa were not able to cross the try line until full time with Tomasi Alosio scoring under the post bringing final score to 21-7.

Our men in blue finished pool games at 2nd place of Pool A behind South Africa.

Samoa will advance to play England as winners of Pool D at 4.42pm Samoa Time (Samoa is 6 hours behind Hong Kong).

The action continues for Manu Samoa Sevens fans who fly all the way to Hong Kong each year to enjoy the atmosphere.