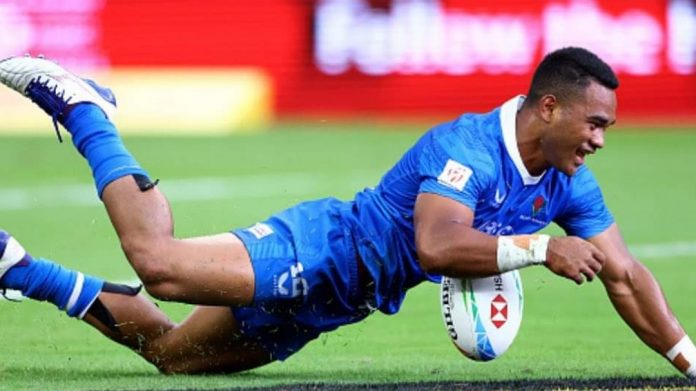 9 April 2022, HSBC Sevens, Singapore. Samoa came out of the gates firing on all cylinders and in the first 60 seconds, Uaina Sione goes over to score Samoa’s first try of the 2022 rugby sevens season.

Va’a Apelu Maliko stabbed a kick through and did enough to win the ball back for Samoa. An easy draw and pass to the right side of the field, and Sione cruised over the white chalk against Australia who are currently placed 3rd in the series standings.

Australia are a world class outfit and quickly regrouped after the shock of conceding a try to a team that haven’t played in 25 months. The Aussies brushed it aside and hit back within seconds with a try to one of their own debutants, Matt Gonzalez.

Down 7-5, Rimoni showed individual brilliance to outrun none other than Dietrich Roache to the tryline. Roache is currently the leading point-scorer of the world series.

Australia’s experience over the Manu showed in the second half. Australia came out with an added gear of urgency and scored two consecutive tries within the first two minutes.

Muliagatele’s debutant-stacked  side learnt a lesson about how quickly things can change in a 7’s match. The Manu’s 10-7 lead all of a sudden became a 19-10 deficit.

An unstable defensive line forced critical errors from the boys that allowed the Australian team capitalise.

The men in blue finally regrouped and got their hands on the ball through some gruesome defence, aided by fresh legs coming off the bench.

Australia slacked off for just a second, and Steve Onosai, the 20 year old who plays for the BBE Vaiala club in Samoa, made them pay once again.

Manu Samoa applied the pressure on Australia and this opened up an opportunity for Steve Onosai, who sliced straight down the middle of the Aussie defence.

The debutant made it look like an easy stroll over the line, adding another try to his name on the World Series tryscorer’s table, and narrowed Samoa’s deficit to 19-17.

An opportunity revealed itself for Samoa to take the win in the last two minutes of the match, but Australia kept their defense tight, and Samoa made a few unforced errors under pressure.

The Aussies turned over possession and scored a try in the dying seconds, to take the final score to 26-17.

The Covid-19 pandemic have kept Samoa away from the World Sevens Series since the Vancouver tournament in March 2020.

Samoa and New Zealand are both returning after two years, and the tournament is already lifted from their inclusion.

In order to participate in this years HSBC Sevens series, Head Coach Muliagatele Brian Lima, Assistant Coach Tausa Faamaoni Lalomilo and Team Manager Tuala Leaega Pat Leota and a 20-man travelling squad have had to relocate and camp in Dubai. Five overseas based players have since left the camp after writing a complaint letter to the Players Association that was leaked to local media.

The remaining squad have spent the last three months training in Dubai without a single match, until now.

Earlier this week, Samoa had the chance to get a run-in with the All Blacks side, giving the youngsters who’ve never played outside of Apia Park, a taste of the international level before today.

Samoa is pooled with three teams in the top 10 of the current HSBC world rankings. Australia is currently ranked 3rd, England is placed 7th and Spain is in 9th place.

The games are listed in local time, and next up, Manu Samoa play England at 7:34pm, followed by Spain at 11:07pm.