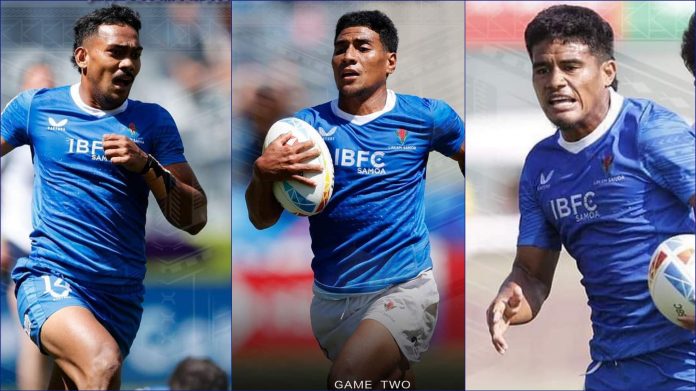 Samoa advance to the Cup semifinal of the Cape Town 7s after a valiant performance against Argentina.

Samoa put Argentina away 22-10 making it the third time this year that Samoa have eliminated Argentina at the quarterfinal stage.

Samoa exploded to a12-0 lead off the back of the silky combination of Fa’afoi Falaniko and Tuna Tuitama.

Falaniko caught Argentina off guard when he put in a pinpoint grubber kick that was gathered impressively by Tuitama for Samoa’s first try.

It was the 20 year old Faafoi Falaniko who again set up Samoa’s second try. Instead of a kick, he threaded a needle of a pass that once again found Tuitama.

The Apia Maroon winger strolled away with acres of space toward the tryline for Samoa’s second of the match.

Samoa did give away a string of consecutive penalties that gifted Los Pumas the opportunity to notch their first try of the match.

Muliagatele Brian Lima’s men backed their defence coming into the second half and opted for long kick-offs to apply pressure on a physical Argentinian side.

Manu’s tactic proved to have worked when Argentina spilled the ball into the hands of Paul Scanlan. With speed, power and prowess the Moataa village hero sped past Argentina’s defense to go over for Samoa’s third try.

With time running out and Samoa leading by only 7 points, Argentina still had the opportunity to win the match. However, a man by the name of Va’afauese Apelu Maliko had other ideas.

The ever ellusive, leading-by-example Maliko received the ball out on the wing. With two Argentinian players in front of him, he decided to run straight through them. He put both Los Pumas players on their backsides on his way to the try line to secure the match for Samoa.

In the other quarterfinal, South Africa got through Great Britain in a close 21-14 and will meet Samoa in the semifinal.