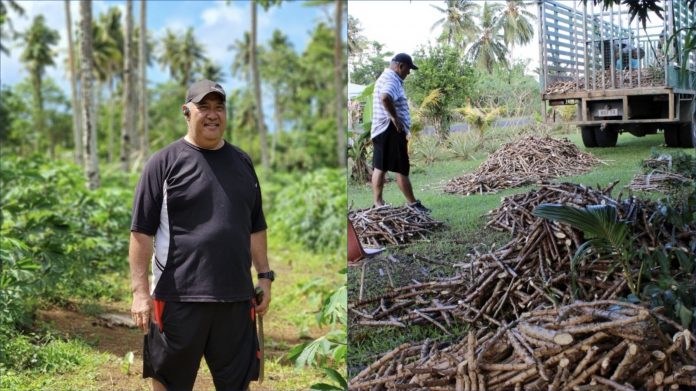 15 September 2022, Stories from PIRAS Project.  The global pandemic that forced 17 months of international border closures for Samoa did take its toll on the local economy and food security, but at the same time, changed norms and shifted mindsets for the better in many other areas including the agriculture sector.

The last 3 years of isolation and uncertainty led to a rise in the number of Samoans returning to the land for not only subsistence living, but sustainable income generation.

It was during this period, Fuimaono Maiava Viiga of Salani Falealili, began to think seriously about food security which led him to re-discover the many benefits of manioka – once a hearty crop and staple food for Samoans during historic times of crisis. Due to its tolerance to drought and high temperatures, manioka is one of the most vital crops to food security.

Ask any Samoan and they will tell you that manioka, however, is not a popular crop, tarnished by a mindset that it is a “poor man’s food”.

At the very beginning of his manioka development, Fuimaono began to make flour out of the sun dried root and took a sample test to the Scientific Research Organisation of Samoa (SROS) where he learned manioka flour was a sought after product in some international markets.

“I only grow the Samoan yellow and Fijian white varieties of manioka. I found through research and trials that both varieties can stay in the ground for a long period and maintain good texture and taste”.

The Falealili farmer says the manioka plant is not just a root crop. “We can also use its leaves, I see a lot of our people have forgotten how it was used back then..”

He adds that the only problem Samoa faces at the moment in terms of opportunities for exports and added value products from manioka, is having a steady supply chain.

Fuimaono says his main goal is to improve food security for his family and village.

“I believe manioka is the crop fit for this purpose as it is one of the most sustainable and easy to grow crops in Samoa”.

According to Fuimaono, “as soon as there is a visible length to the branches, you can propagate what you trim.”

Fuimaono says manioka is one of Samoa’s most durable crops with a yield that multiplies, and it is also easy to harvest and grow including the years you can leave it in the ground.

Inspired by a vision to develop a manioka industry and create market linkages for other manioka growers, Fuimaono started planting the crop around their family home and founded the Salani Falealili Manioka Youth Development which now has 10 members.

Three months ago, Fuimaono received funding support from the Pacific Islands Rural Agriculture Stimulus Project (PIRAS) to help with hiring a machine to clear 10 acres of land. He also received 20,000 manioka stalks, farm tools and equipment to help support his association in building the manioka industry from the grassroots up.

He has now covered 15 acres with the manioka crop and is expanding his farm to include another 5 acres.

“The majority of the manioka on my land is from the Ministry of Agriculture and Fisheries through the PIRAS project. We started up an association for manioka growers in our village, so that we can all work together and move forward as a village for a sustainable future.”

Fuimaono grows two different varieties of manioka in his plantation after experimenting with the many different uses of the crop.

With a major boost from the PIRAS Project, Fuimaono and his growing collective of manioka growers are enhancing local food production and enabling the development of a manioka industry in Samoa.

“My goal for the future after working with fresh and frozen produce of manioka is to eventually be able to have our very own flour mill in our village, not a huge industrial one but something to start with so that is my second phase. This can not only encourage our farmers to grow the crop but also help them out when needed, we are not yet looking to supply the whole of Apia but to start small like in  our own village and district.