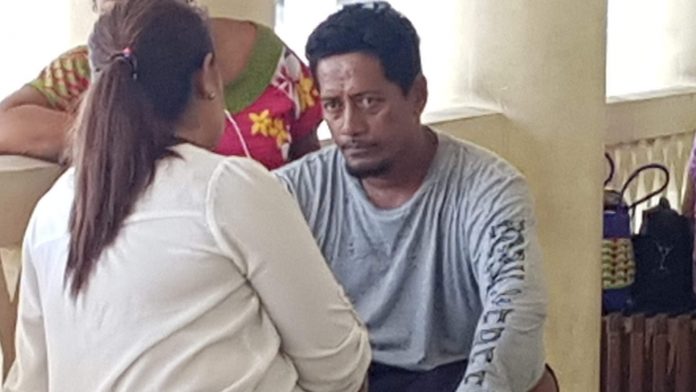 The man who pleaded guilty to charges of an alleged conspiracy to assassinate the Prime Minister of Samoa has asked to change his plea to ‘not guilty’.

Yesterday in the Supreme Court before Acting Chief Justice Vui Clarence Nelson, defense counsel Sarona Ponifasio applied to change her client’s plea from guilty to not guilty.  Ponifasio told the Court that said she saw some issues in the summary of facts and at the time Taualai had pleaded guilty, he did not have a lawyer with him.

Justice Vui responded that written submissions had to be made to the Court for requests that involve a change of plea. He then adjourned proceedings to await submissions from Taualai through his lawyer as well as responses from prosecution.

On the 9th of September this year Taualai Leiloa pleaded guilty to charges related to an alleged conspiracy to commit murder.  He had been unrepresented in Court that day.

When Taualai Leiloa appeared before Acting Chief Justice Vui Clarence Nelson on the 11th of October for sentencing, Justice Nelson did not deliver a sentence but instead advised the accused to seek legal representation because of the seriousness of the charges before him.

It is alleged that the conspirators had approached Taualai Leiloa and convicted murderer Alatise Vitale, to assassinate the Prime Minister of Samoa.

A high chief from Laulii where the alleged plot was first uncovered told Samoa Global News that Taualai was provided a car, a weapon and money sent from Australia and that all of this was discovered during a meeting of the Village Council Committee where youth of the village had been questioned by village matai.

In the meantime, Taualai had been out on bail while Lemai and King Faipopo are being held at Tanumalala to await Court proceedings.

Taualai Leiloa is expected to give evidence at the bail hearing of Lemai Sione and Malele Paulo. That matter is before Justice Mata Tuatagaloa who this week declared a closed court bail hearing for various reasons including the safety of the alleged co-conspirators. Justice Tuatagaloa also stated that the bail hearing would have to await the sentencing of Taualai who at the time, had pleaded guilty.

Taualai has been out on bail since being charged despite his guilty plea because he was understood to have been the main police witness.  It is unclear what the implications are of Taualai’s not guilty plea on the police case.