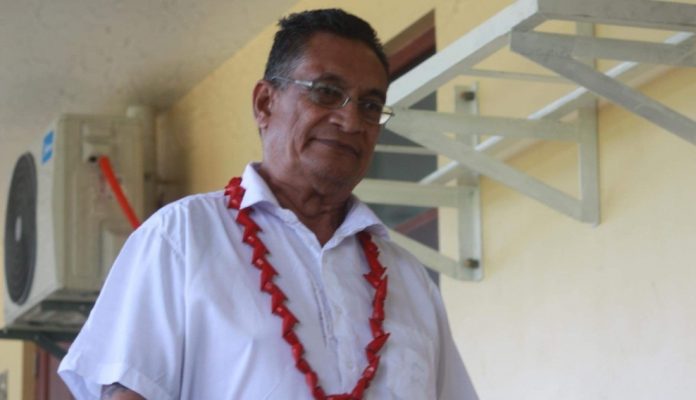 Friday 11 June 2021, Apia Samoa. The Chief Justice has directed an investigation against an elderly man for allegedly passing information to witnesses waiting outside the courtroom during the petition case between Gatoloaifa’ana Amataga Alesana Gidlow and Magele Sekati Fiaui.

Vitale Peterson, who denied the allegations against him, had attended Court throughout the week to observe the case.

During final submissions at around 5pm on Friday afternoon, Court proceedings were interrupted when the Court Registrar brought the matter to the attention of Chief Justice Satiu Simativa Perese.

The allegations were made by a policewoman who says she was on duty at the door of the courtroom during proceedings. Asked to identify herself, and convey what she had seen, the police officer said her name was Faafetai.

She told the Court that she had noticed the accused and two other men going in and out of the courtroom. She alleged that Peterson and others had then approached a witnesses who had not yet gone in to testify. She alleges Mr Peterson told the witness what lawyers had asked previous witnesses.

According to the policewoman, she had immediately warned the three men.

Chief Justice then asked the accused who was standing on the other side of the courtroom if what the policewoman conveyed was true.

“No your honor, that is not true.”

Chief Justice Satiu then ordered the accused to be taken into court custody to await the end of Counsel submissions.

After both lawyers presented final submissions Mr Vitale Petersen was brought back into Court.

Chief Justice Satiu told Mr Peterson that the allegations of contempt of Court against him were serious. The CJ explained to Mr Petersen that witnesses are not to be told what others have said inside the courtroom, and that is why they are made to stay outside until it is their time to testify.

Mr Peterson was released after the Chief Justice told him he can engage a lawyer, and explained to him that the matter would be handed over to Police for investigation.

Counsel for Gatoloaifa’ana Amataga Alesana-Gidlow, Leiataualesa Jerry Brunt summed up his client’s case, discrediting five witness who testified they had received money from his client.

On the other hand, Alex Su’a for respondent and counter-petitioner Magele Sekati Fiaui also argued to oppose allegations made by six witnesses. Fetu Laga’aia as the second lawyer for Magele focused her final submissions on the counter-petition and the five witnesses who testified against Gatoloaifa’ana.