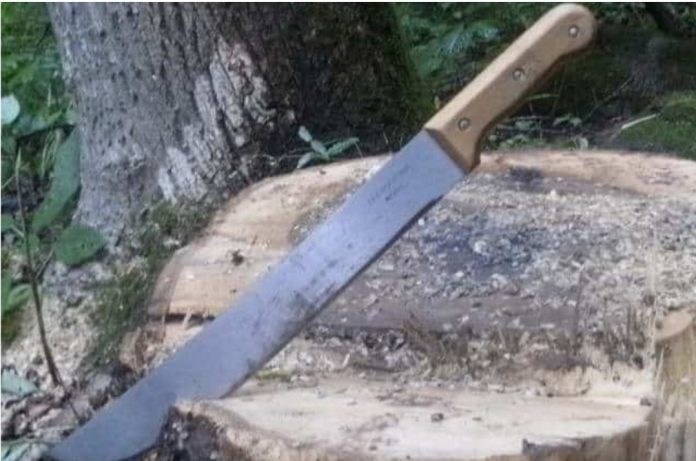 A man found guilty of attacking his brother-in-law with a machete has been sentenced to 8 years imprisonment by Justice Fepuleai Ameperosa Roma of Samoa’s Supreme Court.

So’o Pasila was found guilty by a panel of assessors of 1 count of attempted murder and 1 count of being armed with a dangerous weapon after he attacked Faaui Tanielu with a machete during a domestic dispute at Nofoalii in January 2020.

Pasila and Tanielu’s wives are sisters and the original disagreement had been between the sisters.

Armed with a machete Pasila approached Tanielu while he was working in his plantation and struck him three times.

During the trial Pasila had argued self defense through defense Counsel Unasa Iuni Sapolu, claiming Tanielu had also swung a machete towards him.

At the time a source at Motootua National Hospital told Samoa Global News that the Operating Team (OT) had worked through the night to save the victim’s life.

“He had deep cuts on the right side of his body and his right arm was completely severed;

“The OT team operated for hours.. but no, they could not reattach his arm because it was not brought in.”

During sentencing Justice Fepuleai said it is an aggravating factor that the victim did not do anything to provoke Pasila. The judge added that Pasila did not stop, but continued to strike the victim even after his arm had been severed.

Prosecution requested a starting point of 13 years, however, Justice Fepuleai said 10 years was in line with precedence set by similar cases that had come before the Court. He deducted 18 months for the hefty village penalty imposed on the defendant, and a further 12 months for his apology and remorsefulness shown in Court.

Justice Fepuleai however added 6 months for the defendant’s previous conviction from 2016.

Coincidentally a Samoan national resident in New Zealand was sentenced to 9 years and 5 months in the Napier High Court for attempted murder when he used a machete to attack a man he had been in a scuffle with during an earlier drinking session.

The report says the man was found by his friends “holding his intestines in his hands, blood gushing from his head and body”.

During this year’s Independence long weekend, a video went viral on social media showing a machete being used to attack two men at the Fugalei Fish Market.

Tagaloa Maugaloto Palu, 38, faces one charge of attempted murder, two of grevious bodily harm and one count of being armed with a dangerous weapon in relation to that incident, currently before the Supreme Court of Samoa.