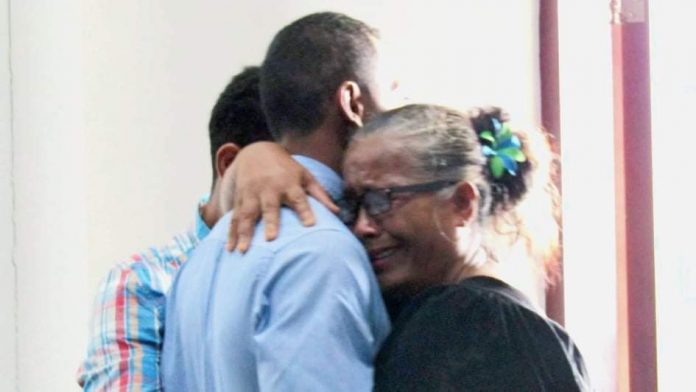 Saleufi Faauuga, now 30, had originally pleaded not guilty to charges of murder and attempted murder for an incident in 2016 that caused the death of a man from the same village.

A’eau told the Court that the decision was made after reviewing the charges, and further discussions with her client.

In tears, Saleufi’s mother held on to her son one last time outside Court, before he was taken away by police.

According to the police summary of facts accepted by the accused, the two men had been drinking when a dispute broke out between them.

Intoxicated, Faauuga then took a gun and shot the deceased in the mouth. The 48 year old later died at the hospital of his injuries.

In tears, Saleufi’s mother held on to her son one last time, before he was taken away by police.

A 2017 report compiled by the Samoa Law Reform Commission found that approximately 72% of all murders, manslaughters and grievous bodily harm offences were committed under the influence of alcohol and/or drugs.

The same report notes concerns by the Samoa Judiciary that excessive use of alcohol and the availability of cheap alcohol was a common contributing factor to many of the serious offence cases heard before them.

Justice Roma has adjourned the matter for legal counsels’ final submissions before sentencing.