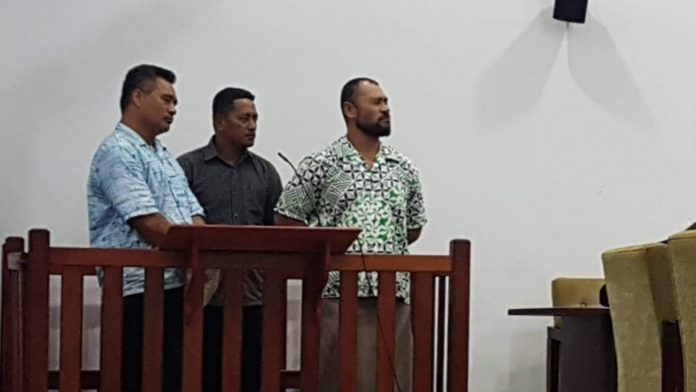 It is understood Taualai has become a key witness for the police against co-conspirators and those who allegedly hired him as a hitman.

The other two defendants in Court today were Samoa First election candidate Lema’i Faioso Sione and Malele Paulo also known as King Faipopo. Both men pleaded not guilty to the charges against them.  The two men are represented by Unasa Iuni Sapolu and are due back in Court on the 18th of September for a bail hearing.

The alleged conspiracy came to light when members of Laulii’s Village Council alerted the Samoa Police with details of an assassination plot.

The Samoa Police Service have thanked the village to Laulii for their cooperation and early reporting of the matter in a public statement.

“The matter was reported to the Samoa Police on Monday 13 August 2019. We thank the Village Council of Laulii for immediately reporting the incident to police”.

Leniu also confirmed that the village of Laulii were subsequently asked by police to offer protection and safe refuge to Taualai and his wife.

“Laulii continues to cooperate with the ongoing police investigation and part of that role is to protect this couple until the case is heard before the Courts,” said Leniu.

As reported by Samoa Global News the swift action and response taken by the Laulii Village Council was based on substantial findings that Taualai was allegedly approached and offered money by the conspirators for the assasination of Prime Minister Tuilaepa.

Sources from the village say that the conspirators provided Taualai with a weapon, a vehicle and payments allegedly received from Tala Pauga in Australia.

This week Police Commissioner Su’a Fuiavailiili Egon Keil confirmed that the process of extradition has begun against one of the “major characters identified by the investigation”.

“As in any police investigation, we will explore anywhere the evidence takes us. Accordingly, the Samoa Police will not cease its investigative responsibilities until a full and clear picture and extent of this criminality is revealed and those who were involved are brought to face the criminal justice system”, said Samoa’s Police Commissioner in response to questions from Samoa Global News.

Taualai will be sentenced on Monday 30th September 2019.