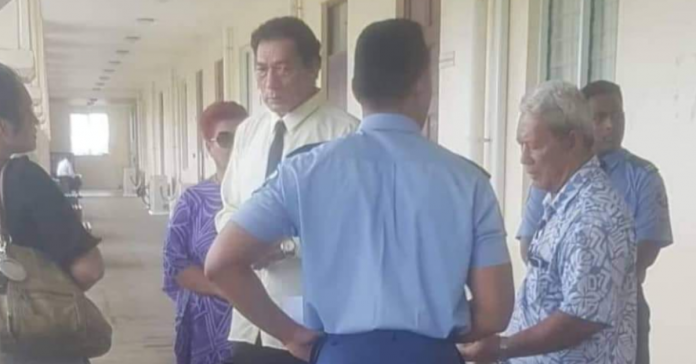 A 59 year old male who shot and assaulted his own nephew was today sentenced by Justice Leiataualesa Daryl Clarke to 3 years and 2 months
imprisonment.

Aukuso Sale was charged grevious bodily harm, armed with a dangerous weapon and discharging of a firearm.

According to the police summary of facts the incident occurred on Father’s Day last year.

At about 3pm in the afternoon, the victim and his 9 year old son went to take some food for Aukuso Sale, at his nearby house.

Sale then asked his nephew to stay for a drink and so the victim stayed and they both drank together.

The court heard that after a period of time, Sale and his nephew started arguing about family matters and this elevated to a fist fight that ended up outside the defendant’s house.

The victim tried to leave with his son, but Sale walked into his house and returned armed with a 12 gauge shotgun.

The court heard that Sale called out to the victim to come back and fight, but the victim kept walking away with his son.

During sentencing Justice Leiataualesa reminded Sale of his behaviour during the incident.

“This angered the victim and he turned around and armed himself with a rock, and that’s when the defendant shot the victim.”

According to a medical report the victim suffered a laceration to the right side of his forehead and bullet wounds on his left arm and left side of his body.

The court heard that the victim collapsed and was unconscious but the defendant beat the victim further by striking him twice with the
handle of the gun.

His 9 year old son cried and tried to stop the defendant and asked him to please stop beating his father.

Justice Leiataualesa listed the aggravating factors as; the offending occurred in the presence of a child, the use of the shotgun to shoot the victim and beating the victim after he was shot as well as the serious injuries suffered by the victim.

However, Justice Leiataualesa said, “given the seriousness of your offending, your use of the 12 gauge shotgun to shoot your nephew and
the continuing nature of your attack on him after you shot him in the presence of a child, the non custodial sentence is out of the question.”

“A community based sentence in cases such as this involving the intentional use of a shot gun to inflict serious injury on another human being will send the entirely wrong message to the community.

“You must be understood that the use of a gun on another person to settle a dispute will be firmly dealt with by the court and in cases such as yours the court must take it serious.”

Prosecution Ann Matalasi in her sentencing report had sought for a 6 year starting point which Justice Leiataualesa said was appropriate.

Aukuso Sale received 3 years and 2 months for grevious bodily harm and 4 months for being armed with a dangerous weapon to be served concurrently.

For the charge of discharging a firearm, however, he was convicted and discharged.