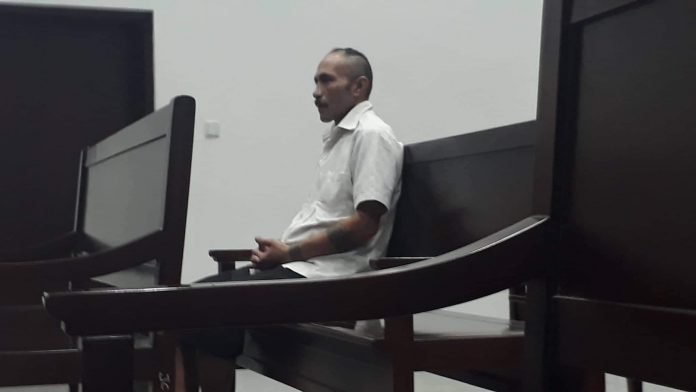 The man who broke into the police station in Apia the night after the biggest drug raid in Samoa’s history and walked out with a bag containing 46 marijuana plants has been sentenced to 12 months imprisonment and 12 months to attend rehabilitation programs for alcohol abuse.

Pauvi ‘Pana’ Limu of Malifa pleaded guilty to charges of aggravated burglary, theft and possession of narcotics. He had several previous convictions for theft and burglary dating back to 1979, but had long retired with his last offending dating back to 2003.

The 55 year old accepted the Police Summary of Facts that he had used a hammer to tear the screen wire of the old police training room where over $10 millon tala worth of marijuana plants had been kept following the Falelauniu drug raid in November 2019.

Limu further admitted that he put 46 marijuana plants valued at $46,000 tala into a rice sack. With the sack tucked under his arm, he was so intoxicated that he left the building through the front door where he was seen by a police officer and subsequently apprehended at Maluafou.

The Samoa Police claimed they had recovered all of the plants.

“We got everything back after a brief foot pursuit”, said Police Commissioner Sua Fuiavailiili Egon Keil at the time.

In handing down the sentence in the Supreme Court of Samoa today, Justice Tafaoimalo Leilani Tuala-Warren said is an aggravating feature that he broke into the Police Station, which houses law enforcement in this country.

“This is both extremely bold and unbelievably foolish. It is hard to believe that anyone in their right frame of mind would break into a police station”.

“He has previous convictions. His offending has in a sense been elevated to the level where it seems he has no perception of the magnitude of breaking into a police station, and not just any district police station, but the Central police station in Apia”.

Tuala-Warren said she believed the accused was remorseful but the fact that he had been drinking pior to the offending was not an excuse nor a mitigating factor.  She did consider his early guilty pleas and the fact that all 46 plants were recovered.

Described in Court as a single father of one child who does not live with him, Pauvi Limu will attend 12 months of rehabilitative and educational programs for his alcohol consumption following his jail term.

The Court heard that he was living with a friend at Malifa when he offended. He has no close families in Samoa however a Reverend stepped forward to confirm that the accused was his parishioner and asked for a sentence of supervision.

Limu had been drinking at a local bar that night when he says he heard about the marijuana in the police station so he went home and got a hammer. He told police that he stole the marijuana so that he could alleviate pain in his legs.

“Having considered the aggravating factors relating to the offending as well as taking into account the sentencing objectives of retribution, deterrence, the need for protection of society, and rehabilitation, I have decided that it is appropriate custodial sentence will deter the accused from further offending”.

“Supervision is to ensure that the accused receives some rehabilitation around alcohol consumption as he has offended for decades”.