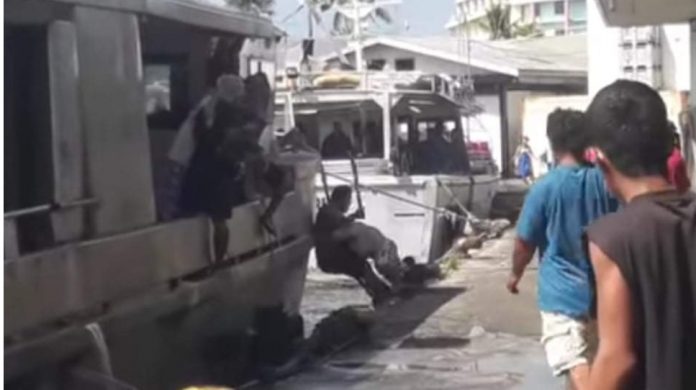 17 July 2020, Supreme Court of Samoa, Mulinuu. Court has granted the bail application of the man charged in relation to the Independence weekend machete attack at the Fugalei fish market.

A former prop for Toa Samoa, Tagaloa Maugaloto Palu, 38, was involved in a widely publicised incident involving a machete on the 30th May 2020 that led to serious injuries of two men who are brothers.

In delivering his sentence in open Court this week, Justice Leiataulesa Daryl Clarke ordered the details of his decision not be released but did highlight that the risks were not significant enough for the defendant to remain in custody.

“In the end I’m not satisfied that there is just cause for the continued detention of the accused. The accused himself, after the incident, reported the matter to police..”

Tagaloa has pleaded not guilty to attempted murder, 2 charges of grevious bodily harm and a charge of being armed with a dangerous weapon.

Fuifui Ioane of prosecution had opposed bail telling the Court that the defendant had chased down the victims in a very public place and had no regard for public safety.

“The fact that the defendant had confidently run around with a machete at the fish market, where he actually assaulted them”.

The affidavits referred to confirmed that Tagaloa had been to the fish market earlier and had an argument with the elder of the two brothers. He then left and returned with a machete.

The Court also heard the affidavit of the victims’ mother who says there has been no traditional ifoga or practice of seeking forgiveness.

Defence counsel argued that the defendant’s release will not pose any risks to public safety because the defendant did not initiate the assault, and had acted on that day, to defend himself from harm.

Defense counsel also clarified that the defendant’s family did approach the victims’ family home at Afega to offer peace, but were told that they had been banished by the village.

Under bail conditions Tagaloa is prohibited from entering or being within 500 meters of the Fugalei fish market and bus terminal where the incident had happened. He was further ordered to live with his uncle at Falevao and report to police weekly.

Tagaloa Maugaloto Palu will appear again in court on the 3rd of August 2020 for the setting of a trial date.