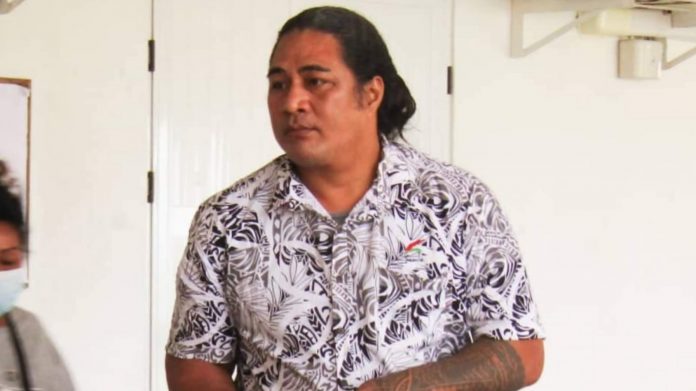 25 May 2022, Apia Samoa, District Court.  The man from Toamua-Uta arrested and charged by Police after allegedly beating his 8-month pregnant wife infront of their 3-year-old daughter on Mother’s Day weekend, appeared in the District Court this week to face two charges against him.

The accused was charged in the District Court, for the lesser charges of assault and Actual Bodily Harm (ABH), and not in the Supreme Court for the more serious charges of Grievous Bodily Harm (GBH).

In the District Court this week, Judge Alalatoa Rosella Papalii granted bail on the condition that the defendant does not leave the vicinity of his home at Toamua. He is ordered to stay away from his wife, and not attempt to contact her.

Judge Alalatoa told the defendant that his pleads to the charges against him have been noted. He does not have to sign-in as part of his bail conditions, because, as the Judge noted, he had been in custody for two weeks since the 7th of May incident.

Ululima Faatui, 8-months pregnant, had given a statement to Police that explained the events of Saturday night, 7th May 2022.

Ululima’s statement is that her husband beat her on Friday night 6th May 2022, and chased her out of their house where she was forced to sleep outside. She could see him through the window seated on a chair drinking his Rover vodka, yelling at their 3-year old daughter to stop crying.

The next morning, while she tried to pack and get ready for work, he beat her again, and threw a pair of pliers that hit her on the back of her head.

Ululima’s statement is that her husband then also chased her down the road, pulled her hair and punched her, causing her to fall to the ground. She said she curled up into a position to protect her unborn child, but the defendant then kicked her repeatedly in the back. When he was done, he left her lying on the side of the road.

“Only when he was done beating me, that he grabbed my phone, and left.”

Fogalevai Lailai did all of this infront of their cyring 3-year-old daughter, who had been walking along the road with her mother that Saturday morning, 7th May.

Speaking to Samoa Global News, Ululima says the doctors have told her that she may have to be induced next week, and to expect that there may be problems with her baby. She says this is because there has been bleeding in the past two weeks.

Fogalevai Lailai Makalio is on bail until the matter is recalled before the District Court in September.