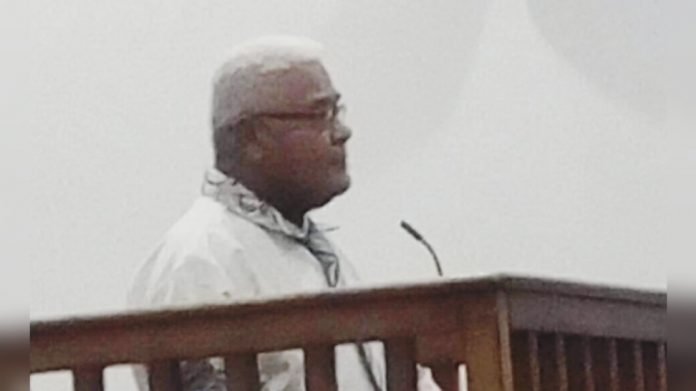 30 May 2022, Mulinuu Courthouse, Apia Samoa. The 69 year old matai charged with the New Years Eve double murder at Afega village that took place in the early hours of 01 January 2021, has requested amendments to his bail conditions, to allow him to leave jurisdiction and travel to Australia for a visit with his wife and children.

Elisara Lole Fata, an untitled father of four in his late 30s, and Fata Utufua Fata, a matai and father of six in his early 40s both died of gunshot wounds before reaching Motootua Hospital that night.

Nephews of Fata Utufua Fata, who stood metres away from their uncle when he was shot, had described the horrific events to Samoa Global News at the time. According to the youngsters, they too, could have been shot by ‘Vao’ (Vaotuua is his matai title in Afega).

The eye witnesses told Samoa Global News that they saw Vao walk up to where their uncle, Fata Utufua was standing. Vao pushed away another matai who was standing with their uncle, and then placed the gun on his chest before firing.

“He was shot point blank, and when he fell on his knees, holding his chest and gasping for air, Vao placed the small pistol to the back of his neck, and shot him again,” said the nephews of the Fata Utufua.

“Then he fell over face down on the ground..”

The defendant applied for and was granted bail in March 2021. Part of his bail conditions was to move away from his wife’s village of Afega, where the incident took place. He has been seen around Apia in his taxi, carrying passengers.

Two traditional apologies (ifoga) to the families of both men who died, were swiftly performed by family of Vaotuua, and the village elders of Falelatai, where the defendant holds the titles of Faalavaau, Lupematasila and Tai’i.

Sixteen months later in the Supreme Court this morning, the defendant requested the Court’s permission to travel overseas, so that he may visit with his wife and children in Australia. The request was put forth by Leaiataualesa Komisi Koria, on behalf of defense counsel Mauga Precious Chang.

The Court has set a bail hearing for later in the month for the request to be heard.

The defendant continues to be remanded on bail, on condition that he signs in weekly with Police, and stay away from Afega village. He is seen driving his taxi around Apia.