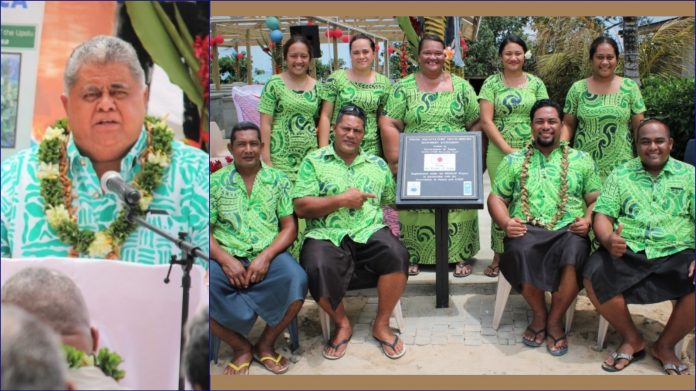 On Friday, December 9th, the Ministry of Agriculture and Fisheries’ Toloa Multispecies Hatchery Extension was officially launched. The launch was attended by the Members of the Cabinet, Government Ministries, Heads of Development partners and agencies and members of local communities with the Keynote address delivered by his Honourable Minister of Agriculture and Fisheries – Laaulialemalietoa Leuatea Polataivao Fosi Schmidt. Revered Amanaki Muavao from the Methodist Church – Vailuutai led the ceremony with some biblical message that with God’s creation we, the human beings have to take good care of every living thing including fish, shellfish, seaweeds and all other fisheries resources.

In partnership with the UNDP, the Toloa Multispecies Hatchery Extension was implemented under the Covid-19 Preparedness and Recovery: Revitalization, Expansion and Diversification of Samoa’s Agriculture and Fisheries Sector or REDSAF Project, funded by the Government of Japan.

The REDSAF Project seeks to strengthen COVID-19 preparedness and recovery for Samoa’s Agriculture and Fisheries Sector through the revitalization and expansion of Sea-Grape or Limu Farming across Upolu and Savaii.

“The implementation of sea-grape farms across 20 villages in Upolu and Savaii with successful harvesting has reinvigorated the potential for Sea Grapes as an income-earning opportunity and export commodity for Samoa. This new infrastructure development builds on this success and hopes to increase village and community participation in the creation and diversification of income-earning opportunities in Samoa’s fisheries sector,” said UNDP resident Representative Jorn Sorensen. The UNDP Resident Representative acknowledged its partnership with the Government of Samoa through the Ministry of Agriculture and Fisheries, as well as the Government of Japan for their financial assistance in funding this project.

The Ambassador of Japan in Samoa, His Excellency, Senta Keisuke reiterated Japan’s commitment to the Government and people of Samoa in building resilient communities through projects that respond to the impacts of the COVID-19 pandemic.

Lastly, The Minister of Agriculture and Fisheries – Afioga Laaulialemalietoa Leuatea Polataivao Fosi Schmidt stated during his keynote address today at the official launching that the Toloa Aquaculture Multispecies Hatchery project funded by the Government of Japan was one of the examples of innovation that helped us address climate change and the 5Fs crisis (food, feed, fuel, fertilizer and finance). His Honourable added that this new hatchery facility would surely contributed to the improvement of Samoa’s resource status, through re-introduction and restocking of seagrape biomass, tilapia fingerlings and many other fisheries resources in the Samoa’s coastal fisheries and

inland waters. Aquaculture is important to increase the harvestable stocks of fish, seaweeds and invertebrates by developing fish farming and grow-outs to supplement natural stocks. His Honourable Minister of Agriculture and Fisheries also extended his gratitude to the Government of the People of Japan through the Ambassador of Japan in Samoa – H.E. Senta Keisuke as well as the UNDP Resident Representative for their continuous support for the development of fisheries and aquaculture in Samoa.

The construction of the hatchery facility through this REDSAF project will help to propagate and culture seagrape also known as limu fuafua and the freshwater fish – tilapia. This will expand and diversify the farming of seagrape to coastal communities and tilapia around Samoa for food security and income generation. This new multispecies hatchery also helps increase resources status through stock enhancement, reintroduction and restocking purposes.

The REDSAF Project also providing support to the Samoa Chamber of Commerce and Industry for the expansion of the Youth Koko Initiative for over 180 young koko farmers. In addition, the REDSAF Project has supported the production of Taro Ethanol used to produce local Hand Sanitizers and development of Bio-degradable face masks made from agricultural waste.