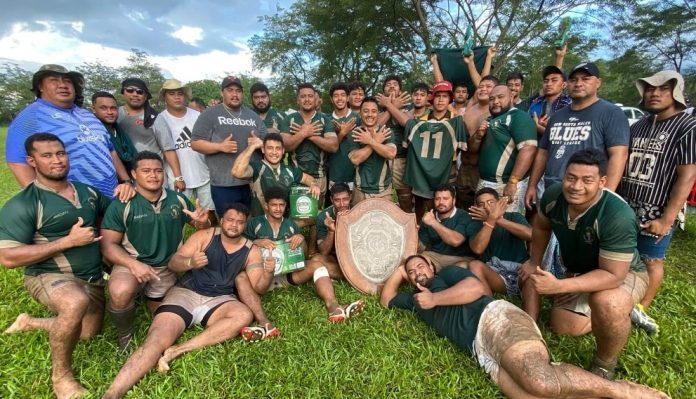 Moataa’s 12 points came from 4 penalty kicks, all off the boot of Willie Leavasa.

“When they realised that Moataa had a weak scrum, Maagiagi really took advantage of that,” said Fuimaono.

Coached by Vaimasenuu Chris Faaofo, Lupe o le Soaga’s two tries were scored by hooker Uili Uili and No.8 Keith Luafau. Maagiagi’s other points came by way of a penalty-try, off a strong Maagiagi scrum that the referee ruled would have eventuated to a try.

Former Manu Samoa International Fainuulelei Matamua Filipo Saena says Maagiagi’s win is good for the competition, but added that the established club had to rebuild and feature new players today due to the high number of the Moataa players being called up to represent Samoa in various teams.

Taumeasina Island Resort Moataa has 6 players in the Under 23 squad camping for the PRC due to leave for Suva on Monday, 2 in New Zealand with the Manumā Samoa squad and 3 now permanently with the Manu Samoa Sevens.

Supporting the head coach of Maagiagi is Tupa’i Paulo Cordtz as Lupe’s Assistant Coach, and Sharay Aiafi as the Team Manager.

Team management says the Lupe o le Soaga side have been training hard in pre season and it was good to see their set pieces working well today. They also wished to thank the village and all their supporters.

The club does not yet have a sponsor for the season, and will face the might of Apia Maroons this coming Saturday for the Shield Challenge