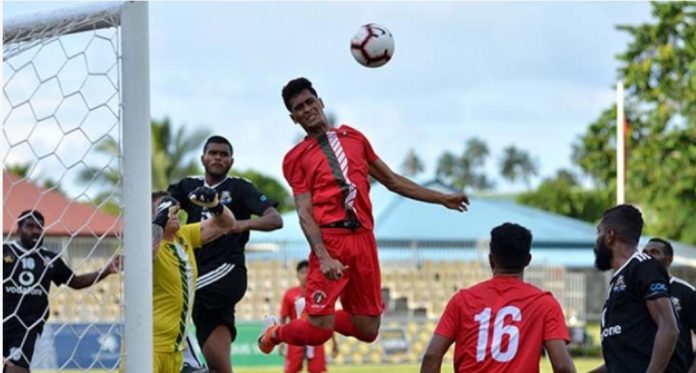 The Lupe o le Soaga soccer team has made history at the OFC Champions League held at the Stade Pater Te Hono Nui in Tahiti yesterday with a win over Fiji’s district champions Ba.

Coach Faaeanuu Paul Matamu Ualesi had set a goal for his team to secure at least one win in this round of the OFC Champions League and the boys from Magiagi have done just that.

“The 4-3 win is historic for Lupe as it was the first time in the OFC Champions League’s history for a Samoan side to score four goals in a group stage clash.”

The final result is unreflective of the match as Lupe o le Soaga humiliated Ba in the first half with a score of 4-0. The shock by Fijian fans created a hysteria of posts through social media including a call by former Ba and Fijian national star striker Taito Bula, for the executive to step down.

“It is a big embarrassment in Fijian football history to lose to a club from Samoa forget about the national team”, Bula told SUNSports.

Meantime Lupe o le Soaga Coach Faaeanuu says his team will continue to work hard as a team and stay humble as they prepare for the next match against Auckland City, adding that they are not in Tahiti to just make up numbers.

“Like we said at the start of this season, we are here to compete, we are not just here to participate”.

“These are giants and all the top clubs in the OFC, and we will bring them a challenge.”

“We just need to work hard, work as a team and stay humble”.

A teary Faaeanuu thanked the support and prayers of Samoa.

Lupe o le Soaga scored four goals in the first 45 minutes. Jamie Mason headed to the net in the 11th minute after a cross from the left wing to open the scoreboard. This goal destabilized Ba that got completely lost in the pitch while Lupe started to have lots of opportunities.

Tom Mosquera extended Lupe’s lead in the 29th minute and Vaa Taualai put Ba in trouble by scoring the third after receiving the ball inside the box in the 38th minute. The Samoans still had time to score another goal when defender Ritchievoy Ueligitone had a successful finish that found the net.

Things did change in the second half as the Fijian side put pressure on Lupe’s defense. Ba seemed to be just eleven boys running with a ball while Lupe  fought to hold their advantage.

Despite the disorganization, Ba then managed to score three goals in just four minutes (Malakai Tiwa at 73, Saula Waqa at 74 and Samuela Drudru at 76), to be back in the game. They missed other opportunities to score and tie the match.

Lupe o le Soaga have posted an appreciation post to pay tribute to their Manager Scott Mcleod and the New Zealand based players for the sacrifices made to help the local club participate at this level.

“Our club welcomed and appreciates the talent and services rendered by our international New Zealand based brothers who have assisted us for this year’s OFC Champions League campaign”.

“We are blessed with the exchange of experiences and opportunities to expose the players in the top tier level of the sport and to potential club prospects and those scouting for players”.

“Despite the challenges to financially afford our participation to this prestigious regional competition, we are grateful for our NZ brothers offering their time, talent and experience to play with us.
Zane Green
Mathew Chant
Jamie Mason
Tom Mosquera
Scott Mcleod, our manager who is always on the field assisting Coach with trainings.

You are all appreciated.