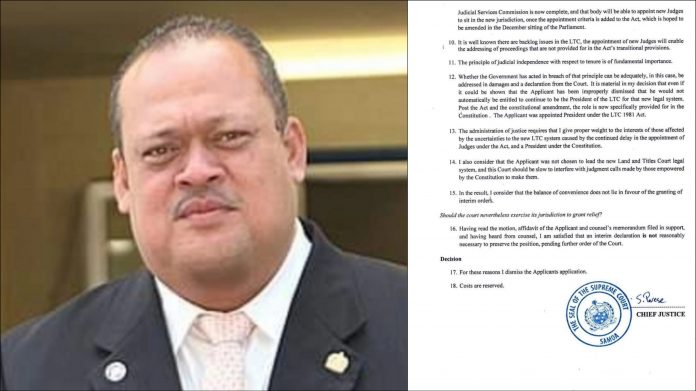 The Chief Justice of Samoa, His Honour Satiu Simativa Perese has dismissed an application filed by Fepuleai Letufuga Attila  Ropati, requesting interim declaration orders against his removal as President of the Land and Titles Court.

Letufuga’s exparte (or without notice) application was heard before the Chief Justice from 2pm to 4pm Monday afternoon. The CJ ordered the Attorney General be served on a pickwick basis.

After a two-hour hearing on Monday afternoon, the Chief Justice delivered his decision published below in verbatim.

Chief Justice Satiu states that the Court does have jurisdiction to grant interim orders against the government or an officer of the government, however, for the aoplication by the LTC President, the CJ did not find

“I have come to the view that this Court has jurisdiction to grant an interim declaration against the government or an officer of the government in an appropriate case under the Government Proceedings Act 1974..

According to the CJ in his decision, “to not have such jurisdiction would leave a serious gap in our law..”

The jurisdiction to grant an interim declaration in government proceedings must, however, be exercised sparingly,” states the CJ.

“The interim declaration must be reasonably necessary to preserve the position of the applicant until the final hearing.”

Serious issue to be tried

The Chief Justice is satisfied there is a serious issue to be tried; namely, whether section 67 of the Land and Titles Court Act 2020 means the Applicant was summarily dismissed without cause as the President of the Court when the Act came into force.

“And if he was not, can he nevertheless be subsequently dismissed whilst he is carrying out his duties under the transitional provisions of the the Act?” the CJ asks in his written decision shared with all media.

“The Attorney General ni her submissions responds by arguing that the decision to appoint a new President arises under the Constitution and that the Government is obliged to make the Constitutional appointment to lead the new Judiciary with all its new features..”

“Whether the Attorney General’s submission adequately addresses the summary effect of the Act is a matter for further consideration at a hearing..”

The balance of convenience

“The second issue is whether the balance of convenience favours the making of an interim declaration..

“Normally, where the Government is involved, the conventional wisdom is that damages is an adequate remedy. In this case it is difficult to see how an award of damages could ever compensate the harm which would caused to the independence of a person holdingthe office of President of the Land and Titles Court”.

The Attorney General submitted that the Head of State had already signed a warrant of appointment for a new LTC President “to act as of tomorrow  1 November 2022”.

The AG submitted that it was imperative for the new President, Lesatele Rapi Vaai, to begin leading the new Judicial system brought into existence by the Act and the changes to the Constitution.

“Importantly, the Attorney General submits membership of the Judicial Services Commission is now complete, and that body will be able to appoint new Judges to sit in the new jurisdiction, once the appointment criteria is added to the Act, which is hoped to be amended in the December sitting of the Parliament.

“It is well known there are backlog issues in the LTC, the appointment of new Judges will enable the addressing of proceedings that are not provided for in the Act’s transitional provisions”.

“The principle of judicial independence with respect to tenure is of fundamental importance,” states the Chief Justice.

“Whether the Government has acted in breach of that principle can be adequately, in this case, be addressed in damages and a declaration from the Court..

“It is material in my decision that even if it could be shown that the Applicant has been improperly dismissed that he would not automatically be entitled to continue to be the President of the LTC for that new legal system.”

The Chief Justice points out that post the Act and the constitutional amendment, the role is now specifically provided for in the Constitution.

“The Applicant was appointed President under the LTC 1981 Act. The administration of justice requires that I give proper weight to the interests of those affected by the uncertainties to the new LTC system caused by the continued delay in the appointment of Judges under the Act, and a President under the Constitution..”

“I also consider that the Applicant was not chosen to lead the new Land and Titles Court legal system, and this Court should be slow to interfere with judgment calls made by those empowered by the Constitution to make them”.

“In the result, I consider that the balance of convenience does not lie in favour of the granting of interim orders..”

Should the court nevertheless exercise its jurisdiction to grant relief?

“Having read the motion, affidavit of the Applicant and counsel’s memorandum filed in support, and having heard from counsel, I am satisfied that an interim declaration is not reasonably necessary to preserve the position, pending further order of the Court.
Decision,” concludes Chief Justice Satiu.

“For these reasons I dismiss the Applicants application.”

The below decision is in response to the question of whether 67(6) can mean the President is removed..is yet to be dealt with by the Court. 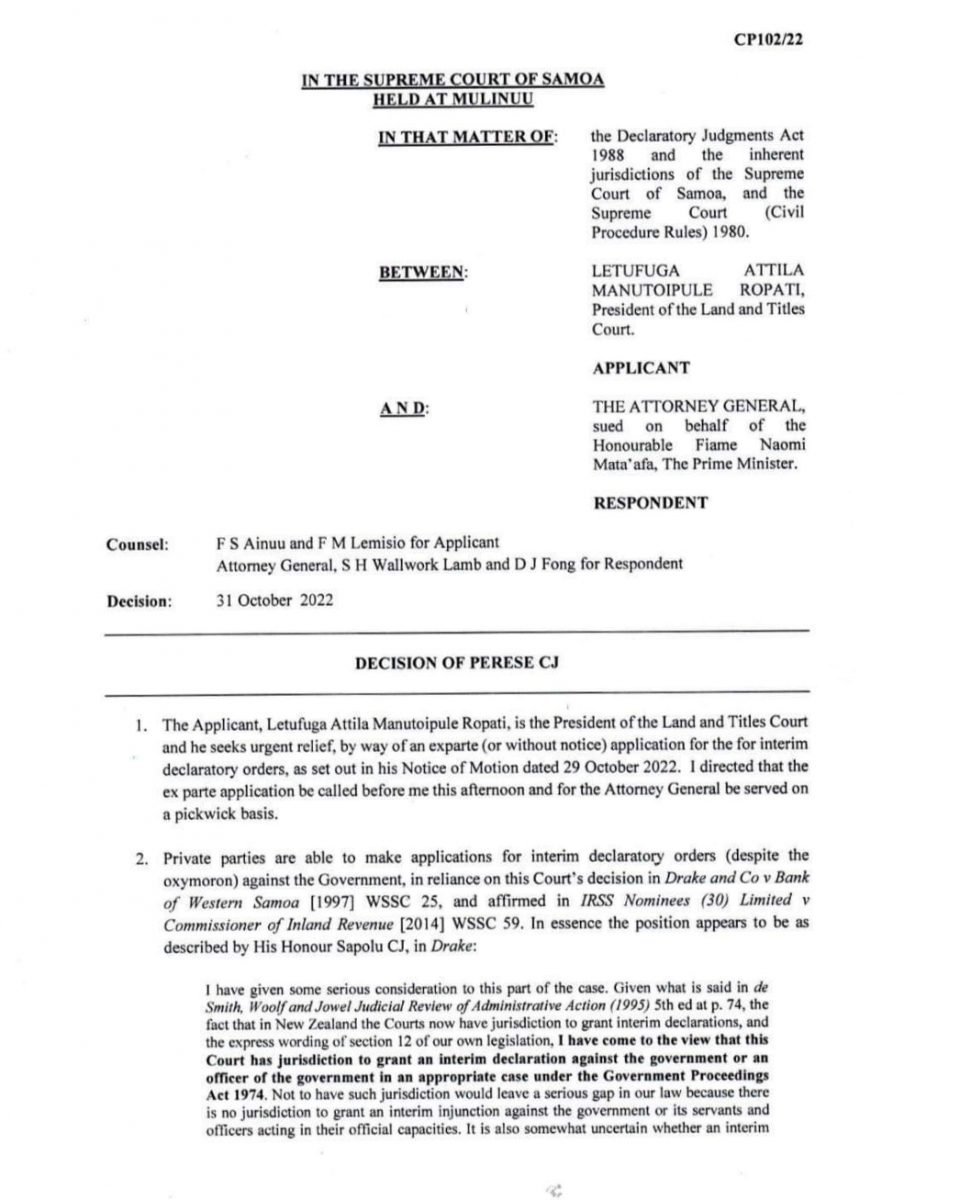 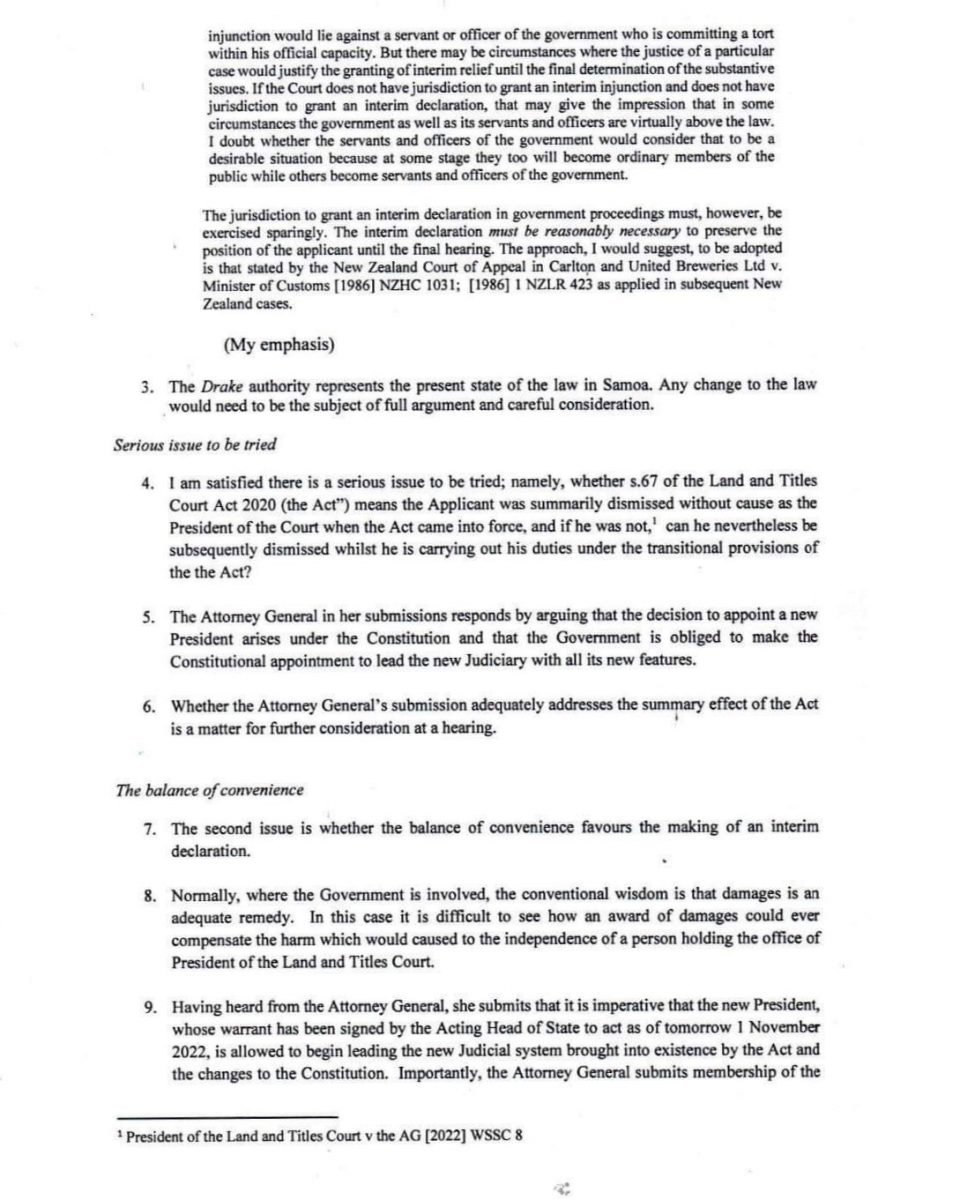 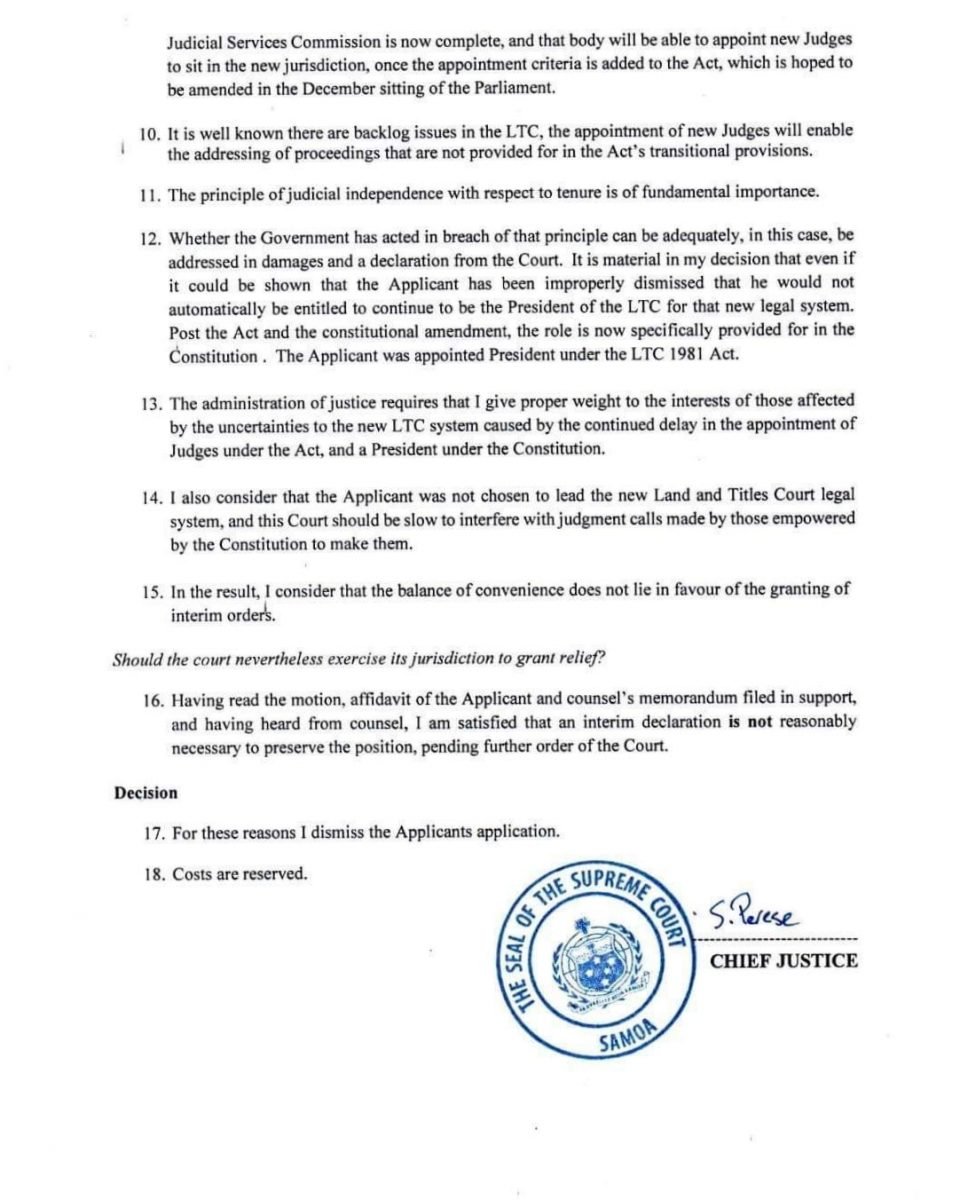