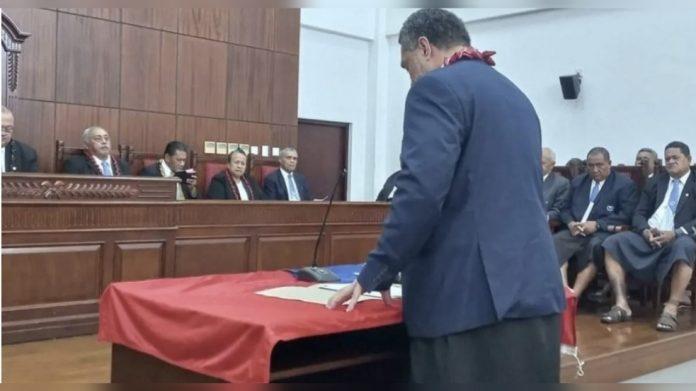 23 April 2022 Apia Samoa. Faimalomatumua Mathew Lemisio has resigned from his position as Deputy President and Judge of the Lands and Titles Court and further delays to LTC cases can be expected as a recent Supreme Court ruling states LTC Judges cannot apply LTA 2020.

He said a small ceremony was held to farewell the outgoing LTC Judges.

Faimalomatumua resigned from his position as Samoa’s Electoral Commissioner in early December 2021 to take up the role after he was appointed by the LTC’s Judicial Service Commission named the Komisi in LTA 2020.

The Komisi is a committee under S104E of the Constitutional Amendment Act 2020. It comprises the LTC President as Chairperson, a Supreme Court Judge nominated by the CJ currently occupied by Justice Tafaoimalo Leilani Tuala-Warren, and the Chairperson of the Public Service Commission Lauano Vaosa Epa. The Registrar of the Courts Moliei Simi-Vaai is the Komisi’s Secretariat.

Faimalomatumua and former Fire & Emergency Services Authority (FESA) Commissioner Taueva Lelevaga were sworn-in last December under a cloud of controversy as the Minister of Justice Matamua Vasati Pulufana had requested the appointment and swearing in ceremony be put on hold. Ministry staff were at the time, stopped from providing support to the President and Judges of LTC for the ceremony.

The resignations come a week after a recent Supreme Court decision that concluded the LTC President and Judges appointed under the Lands and Titles Act 1981 “do not have the authority to exercise jurisdiction under any of the provisions of the LTA 2020”.

The authority to appoint a Deputy President and Judges of the LTC are set out in the new legislations, passed by Parliament in December 2020.

The contradictory Supreme Court decision handed down by Chief Justice Satiu Simativa Perese goes on to “commend the Lands & Title Court President for his strong defense of the principals of Judicial Independence”.

However the decision also states that, “it is a matter for Parliament to now consider how to take these matters forward.”

By way of declaratory relief the Supreme Court decision directs the Executive to provide support services to the President and Judges of the LTC, but only to carry out work with respect to cases filed before the LTA Act 2020 came into force. In other words, filed before 15 December 2020.

The Supreme Court decision essentially halts the majority of the work of the LTC by removing the authority LTC Judges to hear cases under the current legislation, LTA 2020.

According to LTC records, close to 90% of cases now pending and awaiting hearing dates within the Lands and Titles Court were filed post 15 December 2020.

In response to questions form Samoa Global News, the Speaker of the House said Parliament will be sitting next Tuesday 26 April, where it is expected the report of the Special Parliamentary Commission of Inquiry (komiti suesue faapitoa a le palemene) will be tabled. The Parliamentary Committee was appointed to investigate the matter of there being different versions of the controversial amendment bills including LTA 2020.