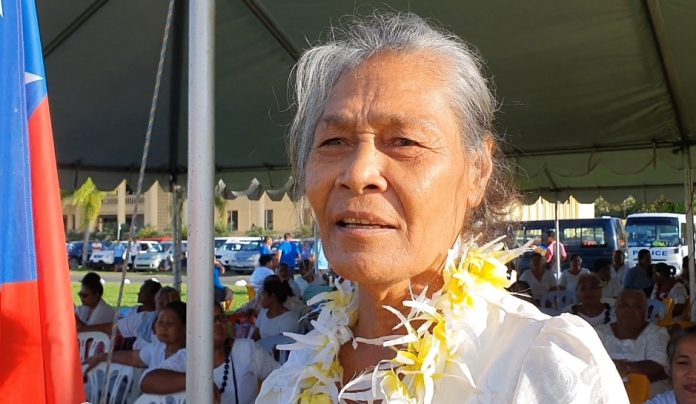 31 March 2021, Apia Samoa. An estimated 2,000 women from various villages and constituencies around Samoa marched towards Malae o Tiafau, a historical land where Samoa first raised its flag of Independence, and its Fale Fono stands across from its Courthouse.

Staunch HRPP supporter, Malama Angster from Salelologa, Savaiii told Samoa Global News she was excited to take part in the morning’s activities because she believes the Human Rights Protection Party have done a lot of good for Samoa.

“A lot of people are saying they want change, but I tell you, what other changes are they talking about?” said Mrs Angster who tells us her late husband was part German.

“Samoa has been through so many developments and there have been a lot of positive changes, seen over the years because of the good leadership of Tuilaepa and the HRPP,” Mrs Angster continued.

“I will forever be grateful for what our country has become, and look at how we have turned out to be.., these are the fruits of the hard work Tuilaepa and HRPP have done for us all,” she added.

On the issue of women’s rights Mrs Angster says, “I believe women should be empowered to become Members of Parliament because they are good advisers, they are calm, and can come up with solutions to any conflicts that arise,” she added.

Many women interviewed told Samoa Global News they were marching to support Aliimalelamu Alofa Tuuau as the 6th woman in Parliament to make up the 10% minimum set out in the Constitution.

“I’m the women’s representative of Leulumoega and I am proud to be here to show my support about the importance of having as many women in Parliament as possible,” said Tuigaoliula Pulemau Tanielu.

Mrs Tanielu says their women’s committee was contacted by the Ministry of Women, Community and Social Development to come and support the cause.

“So we came to show how important it is to have a 6th woman Member of Parliament so that us women would have a voice in politics or in Parliament, which is dominated by men,” she said. 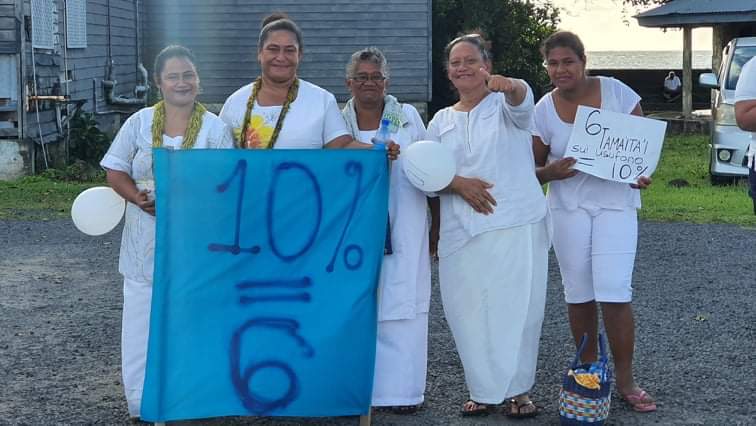 All in white as the themed colour, the women carried posters and banners, and stood as forming a guard of honour along the Mulinuu road from the early hours of the morning until just after 9am. They waved at passing vehicles showing banners with signs stating “10% = 6”.

It was the only passage for the Judiciary and officers of the Court to get to work that morning, and the march intended to show the Court their position on the matter set for hearing in the Court of Appeal on the same morning.

Most women interviewed had also signed a petition that was being handed out, intended for the Courts.

In high spirits, women were seen chanting, singing and even dancing to the tune of a sound system which had been set up on the Tiafau Malae in preparation for a meeting of HRPP  members with chiefs and clergy.

Member of Parliament for Falealupo, Aeau Leota Tima Leavai echoed the same reaction from the mothers.

Aeau Leota says mothers have important roles to play in any society.

“They are the peacemakers, the best advisers and of course bravest leaders when it comes to speaking of what is right,” she says.

“What we are witnessing here today is the support from the women in our country to show that our Parliament needs more women MPs,” she said.