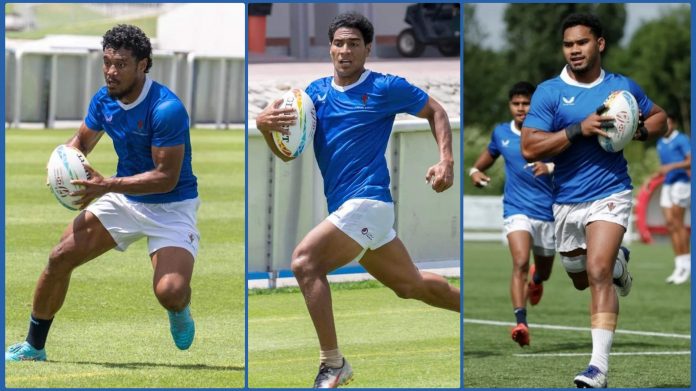 They did not make it easy on themselves, but your Manu Samoa 7’s have topped their pool in the London 7’s after a 26-19 nerve-wrecking nail-biting win over host nation England.

The equation was simple, win, and you avoid 7’s powerhouse Fiji in the quarterfinals. And both teams vying for 1st and 2nd place of Pool D knew this.

England seemed to be more aware of it though when they came out firing on all cylinders.

Englishmen Jamie Anderson and Will Homer scored quick back to back tries that saw England take an early 14-0 lead. It was 6:30am on a Sunday morning in Samoa, and the umu makers would not have been happy at this point.

With all that momentum, England pushed to extend their lead as the match went into referees time in the first half. To the delight of Manu fans, it worked against them when Uaina Sione did well to turn the ball over for the men in blue.

From there it was the 3 playmakers that combined for Samoa to set up their first try. Youngster Neueli Leitufia snuck between two English defenders before offloading to his captain Melani Matavao. Matavao was chopped down by England, but not before he released Paul Scanlan to score in his first game back from serving a 4 match suspension.

Melani converts and the Manu go to halftime trailing by 14-7.

England came back to score in the first minute of the second half, extending their lead to 19-7.

It was going to take something special for Samoa to make a comeback with 5 minutes left on the clock, and that’s exactly what happened.

Paul Scanlan was the player to ignite things for Samoa. Mr Scanlan created a massive hole and Va’a Apelu Maliko burst through it before he unleashed a barnstorming Vaovasa Afa Su’a to score under the post.

With a deficit at 19-14, Samoa’s super subs Owen Niue and Fa’afoi Falaniko fronted up on defense, and secured a crucial turnover to give Samoa possession of the ball.

The ball makes it to the duo of Va’a Apelu Maliko and Uaina Sione, who combined their skill and brilliance to put Uaina over the line and give Samoa a 21-19 lead.

The next two minutes would have no doubt brought a lot of edge-of-your-seat screaming and yelling from Samoans in the homeland and across the globe – as the young Manu 7s fought hard to maintain their lead.

The defensive combination of Falaniko and Niue worked well once again to force a turnover. Paul Scanlan floated through and demanded the ball immediately after the turnover, and then put in a chip and chase which he eloquently gathers himself. Scanlan, redeeming himself from a host of red cards, streaked away to extend Samoa’s lead to 26-19.

England were determined to tie up the match in the dying seconds of the game, and avoid Fiji in the quarterfinals through a points differential.

England found some space down the right wing but was chased down by Paul Scanlan before Captain Fantastic Melani Matavao positioned himself over the ball to secure the game-winning penalty for Samoa.

Vaafauese Apelu Maliko did the honors of kicking the ball out as the referee called the match to an end. Meanwhile the bench is seen jumping and cheering in relief.

Samoa meets Spain in the quarterfinals while England face the Flying Fijians.