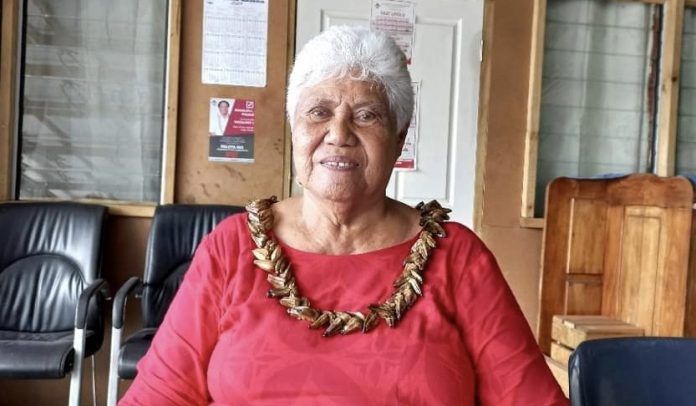 01 December 2021, Apia Samoa. By-election candidate Lolomatauama Eseta Faalata of the FAST political party says she is preparing to bring a Court petition against the winner of the Aana Alofi 2 seat, and is also questioning the timing of the appointment of additional women MPs as declared by a Warrant of Election issued on Tuesday 30th November 2021.

Aiono Tile Gafa emerged the winner of the Aana Alofi 2 by-election by just 19 votes ahead of Lolomatauama Eseta – a FAST woman candidate who had also run in the April 9th General Elections and was one of only two woman candidates to contest in the recent by-elections.

Speaking to Samoa Global News, Lolomatauama says she is deeply saddened by what she ”saw with my own two eyes” in the lead-up to the recent by-elections, and confirms she is filing an election petition against Aiono Tile Gafa.

“It is not fair, because I stuck by the rules, but they did not,” she said. “So I am definitely going to file a petition”.

Lolomatauama also expressed her concerns with the timing of the appointments of Aliimalemanu Alofa Tuuau and Faagasealii Sapoa Feagiai both of HRPP, declared Members of Parliament as of Monday 29th November 2021 by Warrant of Election.

The Warrant of Election issued following the official count of the six by-elections declared eight new Member of Parliament. It has since come under heated online debate and controversy, because it included two candidates declared MPs under the Constitutional special measure that ensures not less than 10% of Samoa’s Parliamentary seats are occupied by women.

Lolomatauama says the appointments are unlawful and not in line with the Court of Appeal decision that set down the interpretation of Samoa’s well known Article 44 – widely debated during the months of the country’s political crisis.

Lolomatauama said she stands for equal opportunities for women in Samoa, and does feel sorry for Aliimalemanu and Faagasealii for being affected by the vicious online attacks, however, she blames the Office of the Electoral Commission for not following the Law.

“The Law is clear that we have to wait until all by-elections are done before the special women’s seats can be decided,” she said.

A Court of Appeal (CA) decision handed down on the 2nd of June 2021 interprets the application of the women’s seats to be made [29] “once there is certainty about the outcome of a general election”.  The Court of Appeal further states that, [31] “We consider that the point of certainty is reached at the conclusion of the determination of the Electoral Petitions and any by-elections that might result.”

The Electoral Commissioner says their interpretation of the decision is that the activation takes place when there is certainty in the outcome of the General Election as stated in the Court of Appeal decision.

Below is an excerpt of the Court of Appeal decision regarding when the women’s seats are to be appointed:

When are additional members appointed?

[28] Having reached the position that we consider that an additional woman member is constitutionally mandated, we now turn to the second issue and that is when the additional member/s is/are to be appointed.

[29] Our interpretation of Article 44(1A) means that the appointment of the additional member/s can only be fulfilled once there is certainty about the outcome of a general election.

[31] We consider that the point of certainty is reached at the conclusion of the determination of the Electoral Petitions and any by-elections that might result. It is only at this time is it possible for the elements of Articles 44(1B),(1C), (1E) and (1F) to be considered. Article 44(1B) requires the results of the Petitions because you cannot know how many additional members are to be appointed. Once appointed, the additional members cannot be unappointed. Yet, if say there were 6 appointed, on a snap shot in time basis, before petitions and by-elections, and then a further 6 were successful at the by-elections, this result would be inconsistent with the Art. 44(1B)(b), that additional members are appointed to enable compliance with the specified number in Article 44(1A), which in the circumstances of this case is 6 women in total, not 12. Furthermore Art. (1C) provides that Clause 1B does not apply if the prescribed number of women are all elected under clause 1 – which applies to electoral constituencies. This would suggest that the legitimacy of the added members (added pursuant to Clause (1B)) is open to question. That can not have been Parliament’s intent.

[33] We do not attribute to Parliament a method which is haphazard to regulate the addition of a woman member. In our view the overall scheme of the constitutional guarantee achieves its purpose when there is a credible level of certainty, and in our view that occurs post electoral petitions and by-elections, if any.