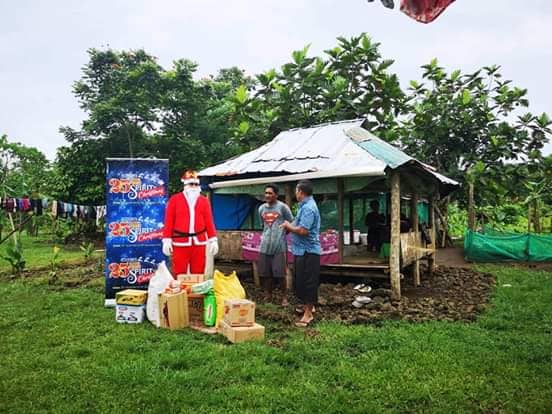 For many years, life has been difficult for 49 year old Seti Taleni of Leulumoega-tuai and his family.

With eleven children, a 74-year-old elderly mother and a job that pays $100 tala per week Seti would do anything to give his family especially his children, a better life.

Having to worry about putting food on the table he also has to make sure that enough water is stored up. A flash light is used when it gets dark because they don’t have electricity.

Then Island Rock Company and their campaign of bringing the Spirit of Christmas unexpectedly turned up to his home.

The father shed tears of joy when he saw what the company had brought for him and his family.

Not only in terms of food but his young children were very excited when they saw toys included in the gift packs.

“Who would have thought that my family would have these many blessings that will last us until the festive season,” said Seti.

“I am speechless because of the love that this local company has shown today.

“My young children now have toys to play with and I don’t have to worry about any more food to prepare for my elderly mother, so I am very happy.”

Seti said his older daughter works as a baby sitter in one of the families at Vaitele Tai and he believes it was through his daughter that the company came to know about his family.

“That daughter of mine has a family of her own and she helps us out when she can,” he said.

“My other son also has a family of his own and he works at the Congregational Christian Church oil factory.

“He helps out when he has enough but I don’t rely on them because I know they also have their own children and family to look after.

“I mow lawns, but I have been home for about two weeks now because I’m sick, so for the past two weeks we have been relying on the plantation for food and I also sell some of my taro so we can get sugar or tin of fish.

“But today I am very thankful to God for sending us these angels to give us these blessings.

“It is true there are still good people out there who will go out of their ways to help people like us.”

According to Island Rock Sales Manager Iosia Maiava, the programme is to target vulnerable families.

“If we can make one family smile this festive season that is the most important thing,” he said.

“We want people to know that God has blessed Island Rock throughout the years and therefore we have to share those blessing with families such as Seti’s family.

“If we can help him lessen his worries then we know we did something good this festive season.”