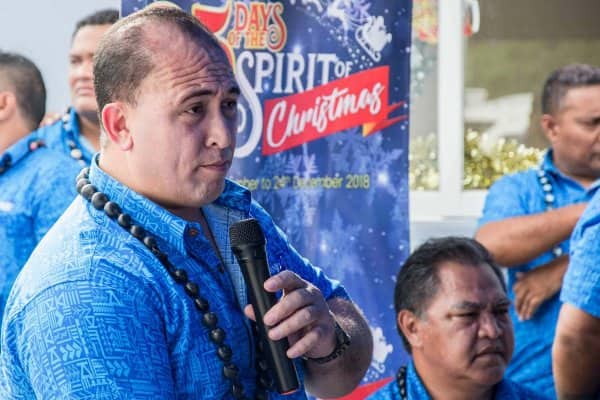 Island Rock Company has launched “25 days of bringing the spirit of Christmas” and will spread out to vulnerable families and charities in Samoa.

The official launched of the campaign was held at the company headquarter at Togafu’afu’a.

Company owner and General Manager, Tuaopepe Vui Asiata Wallwork believed the company has had a prosperous year and so it’s about time to give back to the community.

The families who will be targeted in this initiative were featured in the village voice programme of the Samoa Observer newspaper earlier including some of the charities such as the Samoa Victim Support Group and the Mapuifagalele, Home of the Elders.

“This is not the first time, we have decided to do this,” said Tuaopepe.

“However, this year we’ve decided instead of spending one day going through families and present them with goods, we decided we will start from the beginning of December til the 25th.

“We have seen and witness God’s blessing upon the company and so we have decided to give back to the community, hence why we have launched this campaign.

“Christmas is all about giving and therefore with the 25 days of bringing the spirit of Christmas we want to share God’s blessing to everyone who are in need.”

Tuaopepe went on to say everyone deserves to be happy and it’s during these times that they want everyone to feel blessed and most especially happy.

“Everyone deserves to celebrate Christmas with love and joy,” he said.

“However, we also know that some families it’s very difficult in terms of finance, some families and children won’t be enjoying this festive season because they cannot afford it.

“It is those families that we want to reach out and share with them our blessings from God.

“If we can make one family or even one child smile during this campaign then that is more than enough for us.”

Moreover, Tuaopepe said he is hopeful other companies can join in their Christmas give away targeting families who are in need.

“Maybe in the future we will have more local companies joining us in this initiative,” he said.

“We welcome any companies, individuals, business people who want to join us in making this Christmas a one to remember for some families.

“So look out for Santa in the next couple of weeks who will be coming around your village to make you and family smile this Christmas.”

The programme started today with four families from different villages who received $700 worth of food.

The total number of families that will be able to receive help from this campaign is ten not including the charities.

The company will also be having different activities during this campaign such as early birds specials and much more as well as a Family Fun Day on the 8th of December at the Togafu’afu’a.

Tuaopepe also said they are hoping this programme will one day reach the big island of Savaii.