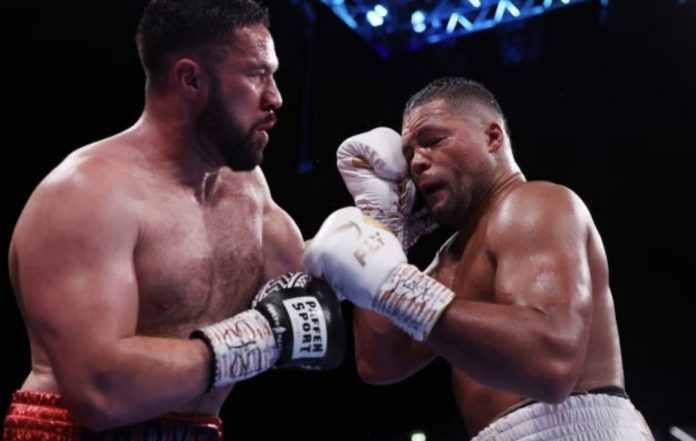 Live Blog from The UK Sun.

A victory will catapult the winner right into the mix for a world title shot in the heavyweight division next year.

Some big shots early from Joyce who rocked Parker and gets in a left hook too.

Parker has done immensely well to stay in it.

But HE IS KNOCKED OUT BY JOYCE IN THE ELEVENTH ROUND.

Parker looks out on his feet, but then produces some big comeback shots it seems.

Tyson Fury can be seen cheering on Joseph Parker, and they both look to be feeling the pace as we near the end of this one.

Joyce is just peppering away at Parker where he can, and gets a good body shot on Parker.

Joyce just not allowing his opponent a breather at the moment.

Good work from Parker who gets some solid left hands in the end there.

It seems Joyce now has a significant lead in this one.

There is some quality work from Joe Parker, who gets a great uppercut on Joyce, but he returns it with interest!

Parker is putting in a big effort in the ninth here.

But Joyce is simply getting some big right hand shots.

Joyce starts well and Parker has a visible cut.

Joyce is really going for it with relentless pressure now, he will not take a backwards step.

Parker does well to try and come back.

The relentlessness of the juggernaut is being shown here in the eighth round.

Huge credit to Parker who is still there despite a cut on his face.

A good right hand from Parker early in the seventh round.

The jab has been key for Joyce tonight, who has had the ‘perfect fight’ so far according to David Haye.

Everything is bouncing off Joyce’s head at the moment.

A good jab from Joyce is followed by a right cross.

Parker comes back with a few good shots of his own and seems to spring into action.

A good spell from Joe Joyce, who is taking a few more risks now.

Parker goes back to the ropes, and the bell comes not a moment too soon for him, as his right eye looks damaged.

Joyce is landing more punches at this stage, and he looks to be the more in-control fighter at this point.

A few good shots from Parker, but he gets caught with a short right uppercut from Joyce.

A dominant three minutes from Joyce.

What a fight we have on our hands, as Parker shows that he has that right hook on him!

Parker fighting hard but that one must be in favour of Joyce.

Its two rounds to one in favour of Joyce for us right now.

Parker gets a very low punch in on Joyce.

Clever boxing on the outside from Joyce, who is respectful of Parker’s power, and knows that the right hand of Parker can cause serious damage.

It’s not really been emphatic one way or the other so far.

A great right hand from Parker, and a chin from Joyce, he just takes it and carries on. That landed plush.

The quality shots in that one were from Parker.

Parker looks like he is waiting for a big right hand over the top, but Joyce does really well and gets a good right and left.

A good uppercut comes back from Parker.

A few big body shots from Parker and another uppercut, but Joyce comes back.

This one is really warming up as we end the third round with a big right hand from Parker!